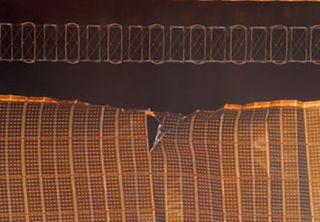 A view of a damaged Port 6 4B solar array wing on the International Space Station after its Oct. 30, 2007 redeployment by the STS-120 shuttle Discovery crew.
(Image: © NASA)

The solarwing, which tore Wednesday during its remote deployment, is generating plentyof power, but engineers fear that it is structurally unstable. NASA officialsdecided to make the repair their top priority after scrapping previous plans toinspect worrisomegears at the other end of the orbital laboratory.

To remedythe problem, spacewalker Scott Parazynski will ride out to the damaged area onthe end on the space shuttle's 50-foot (15-meter) extension boom, which thespace station's Canadarm2 will grapple - a first in spaceflight history.

"Rightnow the crew on orbit is kind of wrapping their brains up around this newoption that we've thrown out there," said Derek Hassmann, lead ISS flightdirector for the STS-120 space shuttle mission."We're going to work hard to get there and be ready on Friday."

Hassmannsaid the spacewalk - the fourth of up to five planned for the mission - couldbe pushed back to Saturday morning if teams on the ground need more time todevise a specific plan of action. Whatever the case, space shuttle and stationcrews said they are readyto help.

Suffredinisaid the fix will "detour" physical stress around the 2.5-foot(0.76-meter) tear in the solar wing. The wing itself is one of two anchoredto a mast projecting off of the Port 6 (P6) solar array truss segment.

"Theobjective is to carry the load around the tear," Suffredini said.

Parazynski,who has six spacewalks under his belt, will thread homemade "cufflinks"through holes that helped secure the arrays during launch seven years ago.Astronauts on board the space station will fashion the straps out of wirebefore the 6.5-hour spacewalk.

"Therecould be as many as seven cufflinks all the way across the wing,"Suffredini said, as there are seven hole-containing lines running the 115-foot(35-meter) length of the solar wing.

AstronautDoug Wheelock will venture outside of the space station to monitor Parazynski'shandiwork, as well as help reel in a guide wire that snagged and ultimatelycaused the tear. Parazynski will clip the troublesome wire while on fullyextended on the end of the boom-arm combination.

Complicatingthe spacewalk is the delicateness of the solar array material - about as thickas a vinyl shower curtain but stronger and sturdier - and the dangerous amountof electricity running through it.

"There'sa lot of power running through this whole thing," Suffredini said."So part of our challenge is we don't want to touch the array, we don'twant to bump into the array."

Suffredinisaid all the tools used by Parazynski to make the fix will be coated innon-conductive Kapton tape. Astronaut Dan Tani, who will operate the spacestation's robotic arm during the spacewalk, will keep Parazynski at a safedistance from the orange-and-black solar wing.

"Wewant to everything at arm's reach if we can," Suffredini said, noting thatParazynski will bring something other than 39 hours and 46 minutes ofspacewalking experience to the table. "One of the advantages of Scott isthat he has long arms. It just gives you a little more reach."

NASAexpects the space shuttle and Discovery and its seven-astronaut crew to returnto Earth on Nov. 7, but mission managers said there are enough supplies onboard to last another two days docked with the space station, should they needthe time. The shuttle's original 14-day mission has already been extended onceto 15 days.