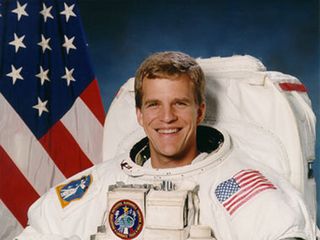 PERSONALDATA: Born July 28, 1961, in Little Rock, Arkansas. Considers Palo Alto, California, and Evergreen, Colorado, to be his hometowns. Married to the former Gail Marie Vozzella. Theyhave two children. He enjoys mountaineering, rock climbing, flying, SCUBAdiving, skiing, travel, woodworking, and nature photography. A commercial,multi-engine, seaplane and instrument-rated pilot, Dr. Parazynski has loggedover 2000 flight hours in a variety of aircraft. As a mountaineer, his summitsinclude Cerro Aconcagua (at 22,841 feet above sea level, the tallest mountainin the world outside of Asia) and 53 of Colorado?s peaks over 14,000 feet inaltitude.

EDUCATION: Attended junior high school in Dakar, Senegal, and Beirut, Lebanon. Attended high school at the Tehran American School, Iran,and the American Community School, Athens, Greece, graduating in 1979. He received a bachelorof science degree in biology from Stanford University in 1983, continuing on to graduatewith honors from Stanford Medical School in 1989. He served his medicalinternship at the Brigham and Women?s Hospital of Harvard Medical School(1990). He had completed 22 months of a residency program in emergency medicinein Denver, Colorado when selected to the Astronaut Corps.

ORGANIZATIONS: Fellow of the Aerospace MedicalAssociation; Member of the American Society for Gravitational and SpaceBiology, the Wilderness Medical Society, the American Alpine Club, theAssociation of Space Explorers, the Experimental Aircraft Association, and theAircraft Owners and Pilots Association.

EXPERIENCE: While an undergraduate at Stanford University, Dr. Parazynski studied antigenic variation in African SleepingSickness, using sophisticated molecular biological techniques. While in medicalschool, he was awarded a NASA Graduate Student Fellowship and conductedresearch at NASA-Ames Research Center on fluid shifts that occur duringhuman space flight. Additionally, he has been involved in the design of severalexercise devices that are being developed for long-duration space flight, andhas conducted research on high-altitude acclimatization. Dr. Parazynski hasnumerous publications in the field of space physiology, and has a particularexpertise in human adaptation to stressful environments.

NASAEXPERIENCE:Selected as an astronaut in March 1992, Dr. Parazynski reported to the Johnson Space Center in August 1992. He completed oneyear of training and evaluation, and was qualified as a mission specialist. Dr.Parazynski initially served as one of the crew representatives forextravehicular activity (EVA) in the Astronaut Office Mission DevelopmentBranch. Following his first flight, he was assigned as a backup for the thirdAmerican long-duration stay aboard Russia?s Space Station Mir,and was expected to serve as a prime crew member on a subsequent mission. Hespent 5-months in training at the Gargarin Cosmonaut Training Center, Star City, Russia. In October 1995, whensitting-height parameters raised concerns about his fitting safely in the Soyuz vehicle in the event of anemergency on-board the Mirstation, he was deemed too tall for the mission and was withdrawn from Mir training. He served as the AstronautOffice Operations Planning Branch crew representative for Space Shuttle, SpaceStation and Soyuz training, andalso served as Deputy (Operations and Training) of the Astronaut Office ISSBranch. Most recently, he served as Chief of the Astronaut Office EVA Branch.In the aftermath of the Columbia tragedy, he was the AstronautOffice Lead for Space Shuttle Thermal Protection System Inspection and Repair.A veteran of four space flights, STS-66 (1994), STS-86 (1997), STS-95 (1998),and STS-100 (2001), Dr. Parazynski has logged over 1,019 hours (6 weeks) inspace, including 20 hours of EVA, and traveled over 17 million miles. Recentlyreassigned from STS-118 to STS-120, Dr. Parazynski will serve as the LeadSpacewalker (EV1) that delivers the Node 2 connecting module to theInternational Space Station. The mission will also feature a major EVA/roboticrelocation of the P6 Truss during the 2nd and 3rd spacewalks.

SPACEFLIGHT EXPERIENCE: The STS-66 Atmospheric Laboratory for Applications and Science-3(ATLAS-3) mission was launched from Kennedy Space Center, Florida, on November 3, 1994, and returned to land at Edwards Air Force Base, California, on November 14, 1994. ATLAS-3 was part of an on-going program to determine theearth's energy balance and atmospheric change over an 11-year solar cycle, particularlywith respect to humanity?s impact on global-ozone distribution. Dr. Parazynskihad responsibility for a number of on-orbit activities including operation ofthe ATLAS experiments and Spacelab Pallet, as well as several secondaryexperiments in the crew cabin. He and his crewmates also successfully evaluatedthe Interlimb Resistance Device, a free-floating exercise he developed toprevent musculoskeletal atrophy in microgravity. The Space Shuttle Atlantis circled the earth 175 times andtraveled over 4.5 million miles during its 262-hour and 34-minute flight.

STS-86 Atlantis (September 25 to October 6,1997) was the seventh mission to rendezvous and dock with the Russian SpaceStation Mir. Highlights of the mission included the exchange of U.S. crewmembers Mike Foale and David Wolf, the transferof 10,400 pounds of science and logistics, and the first Shuttle-based jointAmerican-Russian spacewalk. Dr. Parazynski served as the flight engineer (MS2)during the flight, and was also the navigator during the Mir rendezvous. Dr. Parazynski (EV1) andRussian cosmonaut Vladimir Titov performed a 5 hour, 1 minute spacewalk duringwhich they retrieved four experiment packages first deployed during the STS-76Shuttle-Mir docking mission.They also deployed the SpektrSolar Array Cap, which was designed to be used in a future Mir spacewalk to seal a leak in the Spektr module?s damaged hull. Otherobjectives of EVA included the evaluation of common EVA tools to be used byastronauts wearing either Russian or American-made spacesuits, and a systemsflight test of the Simplified Aid for EVA Rescue (SAFER). The Space Shuttle Atlantis circled the earth 169 times andtraveled over 4.2 million miles during its 259-hour and 21-minute flight,landing at the Kennedy Space Center.

STS-95 Discovery (October 29 to November 7,1998) was a 9-day mission during which the crew supported a variety of researchpayloads, including deployment of the Spartan solar-observing spacecraft andthe testing of the Hubble Space Telescope Orbital Systems Test Platform. Thecrew also conducted investigations on the correlation between space flight andthe aging process. Dr. Parazynski was the flight engineer (MS2) for themission, as well as the navigator for the Spartan spacecraft rendezvous. Duringthe flight, he also operated the Shuttle?s robotic arm in support of thetesting of several space-vision systems being considered for ISS assembly. Inaddition, he was responsible for monitoring several life sciencesinvestigations, including those involving crewmate Senator John Glenn. Themission was accomplished in 134 earth orbits, traveling 3.6 million miles in213-hours and 44-minutes.