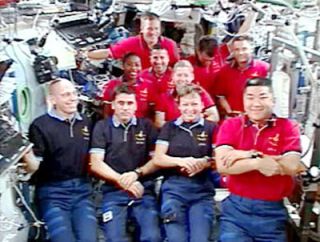 HOUSTON - Astronauts aboard the InternationalSpace Station (ISS) said today that they are ready for any repair work neededoutside the orbital laboratory, even as NASA delayed a planned spacewalk inorder to fix a torn solar wing.

The problemsin space regard the orbital laboratory's solar power-generating equipment:A solar wing on the space station's port-side that ripped during deploymentyesterday, followed by a potentially damaged set of solar-array-orienting gearson the starboard side.

PamelaMelroy, commander for the STS-120 space shuttlemission, said her seven-astronaut crew is ready to help.

"Ithink that it's just welcome to spaceflight. You never know what's going tohappen every morning when you wake up," Melroy said of the evolving troublein space. "We feel confident that whatever comes we're going to able tohandle it."

Spacestation commander for the Expedition 16 mission PeggyWhitson expressed her confidence in NASA's ability to deal with unexpectedchanges.

"NASA'sa very can-do organization and if there's a way to do it, we will figure out asmart way ? to make it happen," Whitson said during the joint spaceshuttle and station crew conference this morning. "We're all up here readyto support."

Missioncontrollers said this morning that they're scrapping Thursday's originalspacewalk plans and delaying it to devise a fix for the torn solar array, whichastronauts might carry out during the fourth of five planned spacewalks for the15-day space shuttle mission.

"We'regoing to change the plan for the next couple of days," NASA astronaut TonyAntonelli, a spacecraft communicator, told Melroy from mission control. Antonellisaid the 6.5-hour spacewalk will happen either Friday or Saturday, hinging onhow quickly mission managers can devise a new plan.

SpacewalkerScott Parazynski said he is eager to help remedy the ripped solar wing, whichis attached to a 35,000-pound (15,875-kilogram) Port 6 (P6) truss he helpedreattach to the space station with Doug Wheelock yesterday morning.

"Itreally depends on what the root cause is," Parazynski said of the 2.5-foot(0.76-meter) rip in the 4B solar wing. "We have trained quite a bit on theflight simulator in Houston ? on the numerous contingencies that we couldaffect on the solar array wings. But I'm not sure if they're applicable to thissituation."

"Theother is to retract the array to within reach of the astronauts,"Hartsfield said. Spacewalking astronauts used such a procedure to help fix asolar array during the STS-117 mission, ISS program manager Mike Suffredinisaid, but noted that getting in reach of the recent tear may be tricky.

"We'regoing to have these things ? to where we can get to it," Suffredini saidof the damaged array. Because the space station's grapple fixture doesn't matchthe one found on the end of the OBSS, however, Suffredini said he wasn't surethe astronaut-on-an-arm plan would work.

"Myguess is you'll hear about us talking about ? retracting the arrays to try andget them in reach," he said.

Whateverapproach might be used to rescue the solar wing, Hartsfield said missionmanagers might revise the fifth and final EVA of the mission to continue with aworkaround for the technical issue.

On Nov. 7,the space shuttle and Discovery and its seven-astronaut crew are slated toreturn to Earth. The original 14-day mission has been extended once to 15 days,and NASA officials said the crew has enough supplies on board to last anothertwo days docked with the space station.