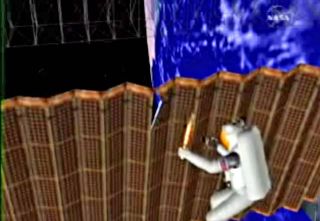 Computer-generated views show how Scott Parazynski will approach the damage site on the 4B solar array wing. He will carry an insulated "hockey stick" like device to defend himself from any unexpected solar array movements.
(Image: © NASA TV)

HOUSTON - With NASA's go-ahead today,astronauts have geared up for a tricky solar wing repair at a far end of theInternational Space Station (ISS) tomorrow morning.

But damagedsolar blankets are not the only problem facing the power-generating abilitiesof the space station. "At this point we have problems on both ends of thetruss, unfortunately," said Derek Hassmann, ISS lead flight director forthe STS-120 mission.

In additionto damage to the solar wing, which generates electricity but is structurallyunstable, spacewalker Dan Tani discovered unusualmetallic grit in solar-array-orienting gears on Oct. 28. Since the Port 6(P6) solar wing tore during its deployment on Oct. 30, however, missionmanagers shifted their focus to repairing the solar power tower.

"Weneed to address one of these two problems before we proceed," Hassmannsaid. "The P6 solar array is the ? priorityproblem that we can go fix now."

'"We'vehad at least three or four extra teams running throughout the shifts,"Rarick said of the last-minute efforts to finish the spacewalk instructions."It's just been a fantastic effort." She added that under normalcircumstances, such a procedure would take weeks or months to produce.

Wheelockwill accompany Parazynski during the fourth and now final spacewalk of themission. A fifth spacewalk was planned for Sunday, but mission managerscancelled the operation to focus on hashing out plans to repair the 4B solarwing, which is attached to the Port 6 truss section of the space station.

The entiresolar wing can generate about 110 volts of electricity at 90 amperes in fullsunlight, but mission managers said Parazynski's risk of being electrocutedwill be more than acceptable.

"Aspacewalking astronaut could put his hand on that solar array and there wouldbe no risk of any shock of any kind," Hassmann said, referring to apristine solar array and glove. Although the 4B array is damaged, Hassmann saidengineers saw no live wires exposed at the site where Parazynski will conductrepairs.

"Anumber of different things have to happen all at once for there even to be asmall risk," he said. "We have a number of risk mitigations in placethat are going to protect Scott from any kind of electrical hazard."

The biggerconcern, mission managers noted, is how far Parazynski will be from the safetyof the airlock--about 30 minutes or so in an emergency, said lead STS-120spacewalk officer Dina Contella.

But DavidWolf said yesterday that the somewhat risky spacewalk is necessary to ensurethe future completion of the space station.

"Therecomes a time when the station needs repaired, one-time events where we--withgood mitigation and knowledge--accept high risk," Wolf said. "Andthat's one of them. Our job is to think of all those possible ways where a badoutcome could occur and be sure that every hazard is mitigated andhandled."

Hassmannsaid the astronauts are excited about the coming spacewalk.

"They'rein great spirits," he said, noting that the astronauts studied theprocedures since they received them Friday morning. "They have a lot ofconfidence that they're ready to go do what we've asked them to do."

The spaceshuttle Discovery and its seven-astronaut crew are slated to leave the orbitallaboratory on Nov. 5 and land at Kennedy Space Center on Nov. 7, weatherpermitting. NASA officials said that the crew has enough supplies to staydocked for the ISS for two more days beyond Monday, should the need arise.