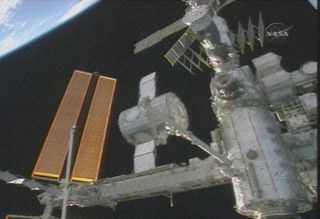 The Italian-built Harmony module is delivered to the International Space Station (ISS) during an Oct. 26, 2007 spacewalk, the first of five planned for NASA's STS-120 mission to the orbital laboratory. Harmony is the hub for future international labs at the ISS.
(Image: © NASA TV.)

HOUSTON - Two spacewalking astronautshelped deliver a new orbital room to the International Space Station (ISS)Friday and primed a massive solar power tower for its own move early next week.

Discovery astronautsScott Parazynski and Douglas Wheelock spent more than six hours working inbulky spacesuits to ready the Italian-builtHarmony node for installation at the ISS among their other tasks.

?Now thecrews that are hot on our heels have a place to come,? Parazynski said afterhis crewmates Daniel Tani and Stephanie Wilson movedthe nearly 16-ton cylinder to a temporary spot on the station?s Unitymodule using the station?s robotic arm.

About thesize of a small bus, Harmony increases the pressurized volume of the ISS by2,666 cubic feet (75.4 cubic meters) and will serve as hub for new European andJapanese laboratories that will launch toward the station on upcoming NASAshuttle flights. The node was named by studentsin a NASA contest and will be moved to its permanent home at the front of thestation?s U.S. Destiny lab early next month by the outpost?s Expedition 16crew.

?It?s justa wonderful thing to see,? John Shannon, head of Discovery?s mission managementteam, said Thursday of Harmony?s ISS arrival. ?This is the kind of mission thatwe all came to NASA for. This is why we?re here.?

They alsoprepared the station?s Port 6 (P6) solar power truss segment for its plannedmove, which is slated to begin Sunday. While disconnecting four coolant linesbetween P6 and its Z1 truss base, Parazynski spotted several ice crystals oftoxic ammonia drift free. He underwent decontamination procedures to ensure hisspacesuit was clean after reentering the ISS airlock.

Thespacewalkers floated out of the ISS at 6:02 a.m. EDT (1002 GMT) as the stationpassed over the west coast of South America.They spent six hours and 14 minutes working outside the ISS.

Discoverymission specialist Paolo Nespoli, an Italian astronaut from the European SpaceAgency, choreographed the spacewalk from inside the shuttle and reminded hiscrewmates to wave as the space station passed high over NASA?s Mission Controlhere in Houston, Texas.

Instead,the astronauts will spend time releasing some of the more than 700 launchrestraint bolts inside the Harmony node and outfitting it for orbital flight,he added.

Friday?sspacewalk marked the first of a record-tying five excursions planned forDiscovery?s STS-120 mission, which NASA has called its most challengingshuttle mission to date. Parazynski will perform four of the spacewalks,while Wheelock will participate in three of them. Veteran shuttle flyer PamelaMelroy is commanding Discovery?s flight.

Over thecourse of two spacewalks, astronauts will unbolt the 34,994-pound(15,873-kilogram) truss, and then push the robotic arms aboard both the ISS andDiscovery to their performance edge to haul P6 from its mast-like perch abovethe Unity node to a permanent spot on the left side of the station?sbackbone-like main truss. Once P6 is reinstalled, its wing-like solar arrayswill have to be unfurled. NASA has encountered difficulties unfurling andstowing them in the past.

AfterFriday?s spacewalk, Shireman said mission managers will include an extra taskto the chore list for Parazynski and Tani - the astronaut team for Sunday?s spacewalk.One of the spacewalkers will inspect a rotary joint that turns the station?sstarboard solar arrays to track the Sun.

The 10-foot(three-meter) joint and its solar wings were installed at the ISS in June, butit has recently shown signs of increased current and intermittent vibrations. Aloose thermal blanket or bolt could be causing slight friction, leading to the vibration,Shireman told reporters.

MissionControl roused Discovery?s crew this morning with the song ?Rocketman? by EltonJohn, a tune specially chosen for Wheelock to celebratehis first spacewalk.

Wheelocknow has one spacewalk of six hours and 14 minutes under his belt. Parazynskihas spent 26 hours and five minutes working outside a spacecraft during hisfour spacewalks. Their excursion marked the 93rd spacewalk devotedto space station assembly or maintenance since construction began in 1998, aswell as the 65th staged from the orbital laboratory itself.

?Thereisn?t a better job, is there?? Expedition 16 commander Peggy Whitson, thestation?s first female commander, asked the spacewalkers as they headed out.