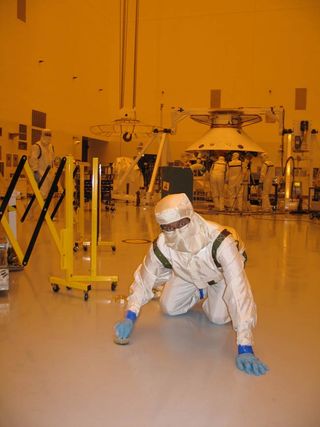 A researcher gets on their hands and knees of a spacecraft assembly floor to sample extreme microbes.
(Image: © NASA/Jet Propulsion Laboratory/California Institute of Technology)

NASA buildsits spacecraft in some of the tidiest rooms on Earth, but a few microbialstowaways always manage to survive and sneak a ride into space.

That couldbe because the space agency's super-sterile "clean rooms" nonethelesssupport a greater variety of microbes than previously thought, researchers havenow found. And, there more of them than expected. NASA is catalogingthe potential hitchhikers as a result, so they can be easily sorted frompotential extraterrestrial life that might one day be detected somewhere in thesolar system.

?Thesefindings will advance the search for life on Mars and other worlds,? said studyco-author Kasthuri Venkateswaran, a microbiologist at NASA's Jet PropulsionLaboratory in Pasadena, Calif.

Venkateswaranand his group's findings are detailed in a recent issue of the journal FEMSMicrobiology Ecology.

Mostbacteria prefer plenty of food and fresh air, but some love"extreme" environments and thrive on just the paint and leftovercleaning solvents found in some NASA clean rooms. Some of the rooms, in whichthe air is continuously filtered, harbor fewer than 10 particles per cubic foot(0.03 cubic meter)--that's about 100,000 fewer dust particles than an equalcube of outdoor air.

Catharine Conley,an astrobiologist and planetary protection officer at NASA headquarters in Washington, D.C., said a lack of competition may cause the super-clean bugs' surprisingdiversity.

Normal microbe sampling is like choosinganimals from a room filled with 1,000 dogs and only 3 cats, she said, and"if you pull 10 animals out of that crowd, they're all probably going tobe dogs."

When mostof the common bacteria (dogs) are gone, however, the remaining extreme bacteria(cats) thrive on the lack of competition and show up more readily in samples.

To map thediversity of clean room microbes, biologists got on their hands and knees andswabbed large areas of NASA clean rooms across the nation.

Instead oftrying to grow the unseen microbes, which is practically impossible to do, thescientists looked to a key genetic marker found in all bacteria called 16Sribosomal RNA.????

Like themethod that genomics researcher Craig Venter has used to assess the diversityof bacteria in the world's oceans, Venkateswaran and his colleagues multipliedthe genetic markers and decoded the sequences. The result? About 193 uniquesequences--indicating 193 different bacterial "species"--werediscovered, at least 13 of which were not known to science before.

Conley saidthe study will be crucial to sorting out the hitchhikers from the real thingduring future searches for microbial life on other worlds.

"It'svery useful information. Weneed to know what microbes a spacecraft is taking with it out into the solarsystem," she said. Conley added that NASA is now cataloging every possibleorganism it can find in clean rooms, as such a list of critters will helpprevent a spacecraft from incorrectly confirming extraterrestrial life in theevent that it detects some of its stowaways.

Conley saidkeeping NASA's facilities even cleaner is a growing priority to prevent "forwardcontamination" of other worlds during future missions.

"Wewant to do whatever we can to make sure we don't introduce life to places likeEuropa or Mars," Conley said.