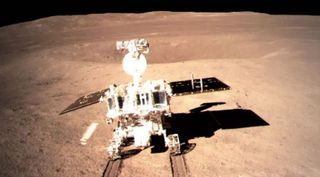 China's Yutu 2 rover after deployment on the surface of the moon's far side.
(Image: © CLEP/CNSA)

HELSINKI — China's Chang'e 4 lander and Yutu 2 rover have tested out payloads and systems on the far side of the moon, with the rover now taking a "noon nap" as a precaution against high temperatures.

The Chang'e 4 lander made its historic landing at 177.6 degrees east longitude and 45.5 degrees south within Von Kármán Crater within the South Pole-Aitken basin at 9:26 p.m. EST Jan. 2 (0226 GMT on Jan. 3), following two weeks in lunar orbit.

Monitoring cameras on the lander imaged the rover wheels during deployment and the craft on the surface, with the images returned to Earth via the Queqiao relay satellite stationed in a halo orbit around the second Earth-moon Lagrange point.

After reaching a predetermined point, the Yutu 2 rover has entered a standby mode to protect itself from temperatures reaching toward 390 degrees Fahrenheit (200 degrees Celsius), the China Lunar Exploration Program under the China National Space Administration (CNSA) announced.

The 310-lb. (140 kilograms_ rover, which has six drivable wheels with four, at the front and back, steerable to allow for pivoting, will resume activities Jan. 10 Beijing time.

Zhang Yuhua, deputy chief commander and designer of the mission, told Chinese state media that next up for the rover will be to travel to the front side of the lander and image the craft.

"After that, the rover will go to its planned area and start a series of scientific exploration projects in the Von Kármán Crater as planned by scientists," Zhang said.

The Chang'e 3 Yutu rover traveled just 374 feet (114 meters) before becoming immobilized during its second lunar daytime on Mare Imbrium on the near side of the moon in early 2014.

Jade Rabbit was the companion to the lunar goddess Chang'e from Chinese mythology, for which China's robotic lunar exploration is named.

Preparations for entering a dormant state for the lunar nighttime to take place Jan. 12, when temperatures may drop to around minus 290 degrees Fahrenheit (minus 180 degrees Celsius).

During this time, the lander — which has a small radioisotope thermoelectric generator — will be capable of limited functions.

Since touching down, both spacecraft have been testing the science payloads and communications and optical systems.

On the lander, the three 16.5-foot (5 m) antennas of the low-frequency spectrometer for pioneering astronomy have been deployed, which will be visible in future Yutu 2 images of the front of the lander.

The lander's topography camera has also been tested and transmitted images back to Earth. The Yutu 2 rover's panchromatic camera and lunar penetrating radar, payloads aboard the first Yutu rover with the Chang'e 3 mission, have also been tested.

Robert F. Wimmer-Schweingruber of the University of Kiel, Germany, which developed the Lunar Lander Neutrons and Dosimetry (LND) experiment on the lander, told SpaceNews that the instrument had been turned on before descent from the lander and again tested after deployment of the rover.

"As we understand, LND is healthy and working nominally," Wimmer-Schweingruber said.

LND will seek to understand the radiation to which lunar soils and rocks are exposed in preparation for potential human exploration, as well as detect subsurface water.