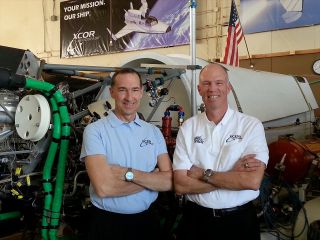 After waiting several years and paying hundreds of thousands of dollars for a presale suborbital flight ticket, the dreams of many aspiring XCOR space tourists have been grounded — and now they want their money back, the Los Angeles Times reported Dec. 30.

The space tourism firm XCOR Aerospace Inc. announced plans in 2008 to launch its private two-seat Lynx space plane. Lynx was expected to fly paying space tourists to an altitude of about 38 miles above Earth, where passengers would experience 90 seconds of weightlessness.

The company first estimated flight tests would begin in 2010, with private flights to follow soon after. Many space tourists bought into XCOR's Lynx model for the chance to briefly experience weightlessness at the edge of space. [Ex-Space Plane: Inside the Hangar at Bankrupt XCOR Aerospace (Photos)]

Having paid XCOR $100,000 for a ticket, customer Nael Hamameh thought his flight would come as early as 2011, according to the Los Angeles Times report. However, that date quickly slipped to 2015, and in 2016 the company shifted its focus from the Lynx space plane to building an upper-stage rocket engine for United Launch Alliance as a source of revenue.

Due to the lack of progress made in developing Lynx, Hamameh pushed the company for a refund. Instead, the company said that they would try to resell his ticket by the end of 2017. Hamameh was also assured he would receive at least $35,000 — which was the portion of each ticket-holder's deposit that the company had said was being kept in a separate escrow account and would be refunded in the event of an incident such as bankruptcy, the Los Angeles Times reported.

However, in November 2017, hopes of flying aboard the Lynx space plane were diminished when XCOR filed for Chapter 7 bankruptcy.

"I was very disappointed, but not because of the money," Hamameh, the chief executive of a French internet startup, told the Los Angeles Times. Rather, "because of the dream that will never come true." [Meet Lynx: XCOR Aerospace's Winged Space Plane (Gallery)]

The Los Angeles Times cited Crunchbase, a platform that tracks fundraising, to say that XCOR reportedly raised at least $19.2 million for their Lynx space plane. While some XCOR customers paid $100,000 upfront to be one of the first 100 people to ride the Lynx space plane, others chose to pay for their flight in installments.

Now, Hamameh is one of 282 estimated XCOR ticket holders who have been left wondering whether they'll get any kind of refund.

Following XCOR's bankruptcy announcement, ticket-holder Steve Jones applied to be a creditor in the case. After being told he wouldn't receive any refund, Jones hired lawyer David Keesling, who has said that there is a chance that some funds could be recovered, but the number of entities involved in the case makes the process more complicated, according to the Los Angeles Times.

The canceled XCOR flight was also devastating for ticket-holder Cyril Bennis, who has dreamed of going to space since meeting NASA astronaut John Glenn as a child. Bennis had even prepared himself for the suborbital flight by visiting the National Aerospace Training and Research Center in Southampton, Pennsylvania.

"The vision XCOR had at that time, obviously on paper, looked very good," Bennis told the Los Angeles Times. "There was never any doubt in our minds … any inkling that there was a problem within the company."

Compared to other private space companies, such as Virgin Galactic or Blue Origin, XCOR's Lynx space plane was designed to blast into space under its own power. However, the company underestimated the complexity of the plane's design and the funding needed to build the vehicle.

"I think we had a really good ship," Dale Amon, a former senior engineer at XCOR, who was responsible for working on the electronics, data and software in the Lynx's cockpit, told the Los Angeles Times. "Things always take longer and cost more than you expect, so you have to keep fundraising until you're done."

There are many more details in the Los Angeles Times story. You can read the whole thing here.