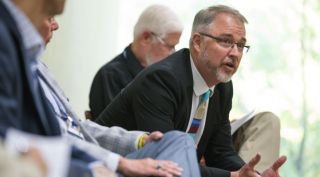 WASHINGTON — The Defense Advanced Research Projects Agency — an organization known for its unconventional approach to solving military problems — has been tasked to help the Pentagon figure out how to organize a new agency focused on space technology development.

The task came from Undersecretary of Defense for Research and Engineering Mike Griffin, a staunch advocate of creating a Space Development Agency to spur innovation in military space programs and bring emerging technologies from the private sector into DoD. Griffin has been a vocal critic of the Pentagon's traditional procurement process and has warned that adversaries like China and Russia are advancing space technology at a much more rapid pace than the United States.

A DoD source shared the contents of the memo with SpaceNews. The memo was sent to key leaders across the department, including the secretaries of the military services, the Joint Chiefs of Staff, U.S. Strategic Command, as well as the director of the National Reconnaissance Office.

Kennedy was not given a lot of time to complete the study. "I expect this effort will require 45 to 60 days," Griffin wrote. The DARPA team has to provide an "interim progress report" within 30 days to Deputy Defense Secretary Patrick Shanahan and the space governance committee. The committee is overseeing a DoD space reorganization to comply with President Trump's directive to establish a new military branch. The Space Development Agency was first mentioned in an August 9 report that Congress mandated in the National Defense Authorization Act for Fiscal Year 2018.

The report said the job of a Space Development Agency will be to develop and field eight key capabilities the Pentagon calls the "DoD Space Vision."

In the tasking memo to DARPA, Griffin said he expects the study team to "focus on the requirements for a low earth orbit communications transport layer and explore the synergy of this essential backbone with the eight space capabilities outlined in the DoD Space Vision."

The decision to assign this task to Kennedy is not surprising given his space expertise and track record attracting commercial space companies to defense programs. Like Griffin, Kennedy has been a longtime critic of the DoD culture that favors exquisite satellites that take decades to develop and cost far more than products available in the open market.

DARPA has been a champion of nontraditional approaches to making space systems more resilient by using small satellites in large numbers. DARPA conceived the Blackjack program to develop an experimental constellation of small satellites in low earth orbit to offer persistent, global coverage for military operations. Griffin frequently has cited Blackjack as a model for how to harness commercial innovation for national security.

Shanahan said last month that he projected the Space Development Agency would be stood up in the first quarter of calendar year 2019. During a roundtable with reporters on Thursday at an event hosted by the National Defense Industrial Association, Shanahan cautioned that many of the details about the new agency have yet to be decided.

"Mike and I are in the midst of a 60 day exercise," he said, referring to Griffin. Shanahan did not mention DARPA or Griffin's memo. He did suggest there are still questions to be answered on what programs should come under the Space Development Agency and on how the new agency would work with existing organizations.

"We've taken all the work that Mike's team has done over the past year and said: Where's the synergy? Where's the time acceleration? Where's the cost benefit?" Shanahan said. "What we want to avoid is a discussion next year that is philosophical. We want to say we chose this development approach because it yields these quantifiable outputs and deliverables, and here's how we can develop this space capability sooner and have real projects to tie to," he added. "Given our bias towards being analytical and quantitative, that's the basis in which we'll also justify the Space Development Agency."