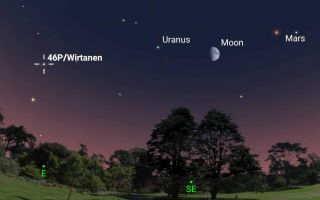 Comet 46P/Wirtanen will be closest to Earth on Dec. 16, 2018. Look for it above the eastern horizon after dusk all month long! It will be bright enough to see with the naked eye, and will look even more spectacular with binoculars and telescopes.
(Image: © SkySafari App)

As you read this, a small comet is on its way toward making a very close pass of Earth in mid-December — its best appearance over a period of four centuries.

Comet 46P/Wirtanen was one of three comets discovered by astronomer Carl Wirtanen at Lick Observatory in 1948, and it has been missed only once since then (in 1980, when it was too close to the sun to see). It is also a member of the Jupiter "family" of comets — comets with relatively short orbital periods of 20 years or less, with aphelia (their farthest point from the sun) near the orbit of Jupiter.

There are currently over 400 Jupiter-family comets known, most of which are generally faint as they pass by. This is chiefly due to the rapid depletion of their volatile material through numerous trips into the inner solar system, which is an artifact of their short orbital periods. 46P/Wirtanen is a good example; it has always been nothing more than a small, dim object in the night sky, never getting brighter than ninth magnitude — smaller magnitudes are brighter — and usually accessible only to those using moderately large telescopes. [The Top Skywatching Events to Look for in 2018]

A jostle from Jupiter

Jupiter-family comets will occasionally have their orbits perturbed when they make a close approach to Jupiter because its strong gravitational field can alter — sometimes quite significantly — a comet's path through space.

In the case of 46P/Wirtanen, it underwent two such interactions with Jupiter — in April 1972 and February 1984 — that pushed its orbit about 50 million miles closer to the sun as well as very near to the orbit of Earth. With its current orbital period of 5.4 years, it has been alternating between evening-sky and morning-sky returns. But the evening-sky returns have been getting progressively more favorable.

Now the stage is set for a remarkably close approach.

Based on observations from previous apparitions, researchers have determined that around the time of its closest approach to Earth, called perigee, 46P/Wirtanen will become as bright as third magnitude, which is bright enough to be glimpsed with the unaided eye.

But while that sounds fascinating, 46P likely will not evolve into a spectacular sight.

If 46P were reasonably large, it would likely put on a dazzling show around the time of its closest approach.

Instead, what we are dealing with is a very small and intrinsically faint comet; ground-based observations combined with images taken with the Hubble Space Telescope in 1996 revealed the nucleus of 46P to have a diameter charitably estimated to be around seven-tenths of a mile (1.1 km) — one of the smallest cometary nuclei to be measured so far. That's only about one-tenth the size of Halley's Comet and perhaps only one-thirtieth the size of Comet Hale-Bopp.

And it should also be pointed out that 46P is not expected to grow much of a tail — if there is any tail to be seen at all. Big, bright comets usually spawn tails composed of highly reflective dust particles that make for long and eye-catching appendages. But tails from tiny comets like 46P tend to be composed mostly of gases and are often long, thin, quite faint and rather hard to see. More likely, the comet will look like a fuzzy and diffuse ball of light, which may be quite difficult to see against the backdrop of a light-polluted sky. So, if you hope to catch sight of this cosmic vagabond, you most definitely will need to travel far from city lights. The darker your sky, the better. And certainly, binoculars or a telescope will enhance your view. Around the time when it is passing closest to Earth, the comet's head will likely swell in apparent size to more than double the size of the moon.

But again, in order to see that, you will need to "turn up the contrast" and be under a very dark sky.

As December opens, 46P is near the Cetus/Eridanus border at a declination near -20 degrees. By New Year's Eve, it will have rocketed on a north-northeast trajectory to a declination of +56 degrees into the constellation Lynx. For most midnorthern latitude locations, it will become circumpolar on the day after Christmas; in other words, just as the Big Dipper or Cassiopeia appear for most northern locations, it will neither rise nor set, but rather be visible in the northern sky all night long.

Along the way, on the evening of Dec.15, it can be conveniently found passing almost midway between the Hyades and Pleiades star clusters. On Dec. 21 it will form a triangle with the lowest two stars that make up "The Kids" asterism in Auriga, 10 Eta (η) Aurigae and 8 Zeta (ζ) Aurigae. And on the nights of the 22nd and 23rd, it will pass within a few degrees to the south and east of the brilliant yellow-white star Capella.

Another thing to take into consideration will be the moon; it will become an increasing factor during the middle of December, lighting up the sky during the first part of the night and seriously interfering with observations of the comet. It will set later in the night, leaving the sky dark during the predawn hours, but as it approaches full phase on Dec. 22, the amount of time between moonset and the first light of dawn will get noticeably shorter.

After full moon, dark-sky opportunities open up in the evening sky. On Christmas Eve, the time between the end of evening twilight and moonrise lasts about three-quarters of an hour. A week later, 46P will be visible most of the night without any lunar interference, and about a half hour after the start of the New Year, it will stand more than three-quarters of the way up from the northern horizon to the point directly overhead, and probably hover at around fourth magnitude.

Looking back ... and ahead

This upcoming apparition will be, without question, the very best by far of 46P/Wirtanen over a period of four centuries. I have investigated the comet's orbital motion going back 200 years in the past and looking ahead 200 years in the future. Prior to its encounter with Jupiter in April 1972, 46P's perihelion distance did not change too much. In May 1816, its nearest approach to the sun was 163 million miles (262 million km) — out beyond the orbit of Mars.

As for the future, another Jovian encounter in November 2042 will push 46P farther out in space, increasing its perihelion distance to 113 million miles (182 million km). Twelve years later, another very close approach to Jupiter will move 46P even farther away, to nearly 186 million miles (299 million km) from the sun. Yet another close pass to Jupiter in March 2197 will nudge the comet still farther out.

And some two centuries from now, 46P will be coming no closer than 200 million miles (323 million km) to the sun.

Thus, we can be certain that there can be no very close approach to the Earth ever again. So take full advantage of this upcoming very close encounter!