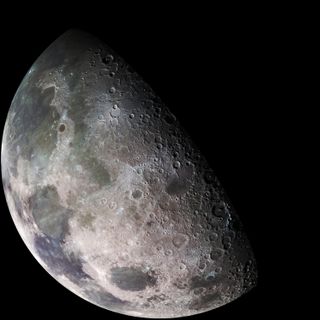 NASA wants to use the moon to build commercial partnerships and develop technologies that could one day be applied to Mars exploration.
(Image: © NASA Goddard)

NASA has its sights set on the moon, and the agency has selected the first batch of commercial project proposals it will include on its journey back to our nearest neighbor, and then on to Mars.

The selected companies will be revealed Thursday (Nov. 29) during a news conference held at NASA's headquarters in Washington, D.C. NASA Administrator Jim Bridenstine will lead the news conference. The event will begin at 2 p.m. EST (1900 GMT); you can watch it live on Space.com, courtesy of NASA TV, or directly at the agency's website.

"Working with U.S. companies is the next step to achieving long-term scientific study and human exploration of the Moon and Mars," NASA officials wrote in a media alert.

Bridenstine will be joined by representatives of the companies whose projects have been selected, as well as by Thomas Zurbuchen, who leads NASA's Science Mission Directorate; astronaut Stan Love; Andrea Mosie, Apollo sample-laboratory manager; and Barbara Cohen, a scientist who works with NASA's Lunar Reconnaissance Orbiter mission.

NASA's current plans aim to have humans orbiting the moon again by 2023 and landing later in the decade, but the agency has always expected to precede crewed flights with robotic lander missions.

Incorporating U.S. companies is a key principle of NASA's plan to extend human space exploration first to the moon and then to Mars. Private partners will help keep costs as low as possible. (International partnerships are also in the forecast, for much the same reason.)