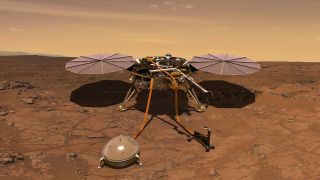 An artist's interpretation of the InSight lander operating on the Martian surface.
(Image: © NASA/JPL-Caltech)

All systems are go for landing on Mars on Nov. 26, NASA personnel affiliated with the InSight mission confirmed during a pair of news conferences held today (Nov. 21).

As of that news conference, the spacecraft had traveled about 295 million miles (475 million kilometers) of the 301 million miles (484 million km) that will make up its total journey. But one of the most serious hurdles remains, the entry, descent and landing process, which will begin at about 3 p.m. EST (2000 GMT) on Monday (Nov. 26).

"My heart is beating inside of my chest like a drum," NASA project manager Tom Hoffman said during the news conference. "While everybody's off having turkey tomorrow, there will be a bunch of people here at JPL [NASA's Jet Propulsion Laboratory] working all day long, hopefully taking a little bit of a break for a turkey dinner, but largely working to make sure we land successfully on Mars." [NASA's InSight Mars Lander: Full Coverage]

Part of that work will include determining whether the spacecraft needs one more tiny nudge to get it in place for the landing. Since it launched, InSight has made four tiny tweaks to its path to ensure it arrives on target. It was able to skip one additional maneuver because the others have gone so smoothly, and the team thinks the probe may be able to skip the final adjustment, scheduled for Nov. 25.

Lining up the spacecraft properly will boost the odds that everything will go smoothly during entry, descent and landing. Although that process lasts for less than 7 minutes, a lot could go wrong as the spacecraft abruptly slows from its initial speed of 12,000 mph (19,300 km/h) down to just 5 mph (8 km/h) when the lander touches down.

Fortunately, landing is looking clear, according to scientists who have been providing daily updates for the touchdown. The dust storms that have plagued Mars this year have mostly died down, and InSight's landing site, Elysium Planitia, has been particularly quiet. "For the last month or so, things have been looking really good," Rob Grover, who is overseeing the entry, descent and landing phase, said during the news conference. "We're expecting a very plain day on Mars for the landing, and we're very happy about that."

Once InSight touches down, it will twiddle its thumbs for about 16 minutes to allow the dust it kicks up to settle down again. Then, the lander will deploy its circular solar arrays — a crucial step in the process, since the battery on board will last only about one Martian day.

If that first deploy doesn't work, InSight has three more opportunities to unfold them, Stu Spath, the project manager at Lockheed Martin, which built much of the spacecraft, said during the news conference. "The spacecraft is entirely capable of taking care of itself during that period," Spath said.

The crew confirmed that it will be a bit of wait to know how the landing went. Final confirmation that the solar arrays unfurled will come from the orbiter 2001 Mars Odyssey. But that spacecraft will be on the wrong side of the planet to send its message back to Earth, so the team will need to wait for nearly 6 hours for the orbital mechanics to line up properly.

A pair of tiny satellites that traveled with InSight, called Mars Cube One or MarCO, may ease the wait. The two small companions carry test technology that, if all goes well, will relay signals from the lander straight back to Earth, bypassing the large Mars orbiters.

The rest of us will hear about the landing later on Nov. 26, when NASA holds a news conference after the fact, sometime after 5 p.m. EST (2200 GMT). Until then, as Philippe Laudet, who leads the seismometer project on InSight, said when wrapping up his portion of the news conference, it's "Goodbye, thank you, and see you on Mars next week!"