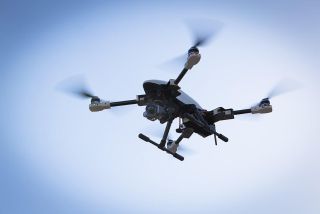 Drones can interfere with rockets if flown too close to the launchpad.
(Image: © NASA)

Traditionally, the most frequent reasons for scrubbing rocket launches are technical problems and weather — and NASA would like your help keeping it that way.

That's the takeaway message of a short statement released by the agency in preparation for the next launch scheduled from NASA's Wallops Flight Facility site in Virginia. Because the site sits near populated areas, the agency worries that people using drones could accidentally interfere with the launch, which has already been postponed 24 hours on account of weather concerns.

Northrop Grumman's Antares vehicle is now scheduled to launch on Friday, Nov. 16, at 4:23 a.m. EST (0923 GMT), carrying a Cygnus resupply capsule to the International Space Station. It's the first full-fledged rocket to launch from the site since the most recent Antares liftoff on May 21, although the site has seen sounding rocket launches in the meantime.

"Drone operators are being urged to exercise caution if using their aircraft to view the Nov. 15 Antares rocket launch and [are asked to] avoid flying over the public and NASA Wallops Flight Facility property," the agency's statement, which was released before the launch was delayed because of weather, reads. "To not pose a hazard to launch operations, drones should not fly over NASA Wallops Flight Facility property, the marsh areas between Wallops Island and the mainland, and over the Atlantic Ocean east of Wallops Island."

The Federal Aviation Administration regulates where individuals can use drones and how people can maneuver the robotic flyers. Those rules include staying away from airports and crowds of people.

Despite the pre-dawn hour, NASA is expecting several thousand people to attend the Antares launch. Blastoffs from the site are popular spectacles, because they can often be seen up and down the East Coast if cloud cover cooperates.