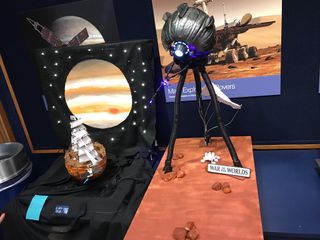 Engineers at NASA's Jet Propulsion Laboratory in California made this pumpkin "War of the Worlds" tribute for Halloween 2017.
(Image: © NASA/JPL-Caltech)

Eighty years ago this week, "War of the Worlds" aired across the country and secured a creepy legacy for Grover's Mill, New Jersey. For Halloween this year, why not take a listen yourself to the historic broadcast?

"War of the Worlds" aired as a part of Orson Welles' Mercury Theatre on the Air radio program on Oct. 30, 1938, and was based on H.G. Wells' science fiction novel first serialized in 1897. Because of its realistic tone — the story is told, at first, in a series of "breaking news" interruptions to a music program — many listeners at the time thought that a real Martian invasion was happening, and that New Jersey (and later New York) was falling. [The "War of the Worlds" Radio Broadcast Explained]

You can relive the terror for yourself with the full broadcast audio embedded below, courtesy of Archive.org. Or throw a listening party and pretend the civilization-destroying forces are coming from out of this world.