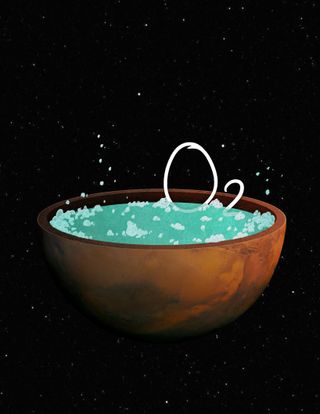 Pockets of salty water just beneath the Martian surface may contain enough oxygen to support life — in some places, even complex multicellular life such as sponges, a new study suggests.
(Image: © NASA/JPL-Caltech)

Salty water buried just beneath the Martian surface could have enough dissolved oxygen to support microbes, and perhaps even simple animal life such as sponges in some places, a new study suggests.

This surprising conclusion could help reshape scientists' understanding of the Red Planet's habitability, both past and present, study team members said.

"We live in exciting times," said lead author Vlada Stamenković, a research scientist at NASA's Jet Propulsion Laboratory in Pasadena, California. "Especially as there is so much more work still needed to better understand the Martian habitability, I hope this creates excitement in the [scientific] community, in the world, to think of Mars as a potential place for life to exist maybe even today." [The Search for Life on Mars (A Photo Timeline)]

Water flowed liberally across Mars' red dirt in the ancient past, as observations by spacecraft such as NASA's Viking orbiters, Mars Reconnaissance Orbiter and Curiosity, Spirit and Opportunity rovers have shown. Indeed, many scientists think the Red Planet even featured oceans billions of years ago.

This surface water disappeared long ago, after Mars lost most of its atmosphere and transitioned to the cold, dry world that we know today. But researchers believe that some wet stuff probably persists underground to this day — in deeply buried aquifers as well as in salty brine pockets, some of which may lie just below the surface.

For example, some scientists think the seasonal Martian dark streaks known as recurring slope lineae are caused by the escape of such brines, which can remain liquid at much lower temperatures than "pure" water because of their salt content.

Stamenković and his colleagues modeled the oxygen-harboring potential of near-surface brine reservoirs, calculating how much dissolved O2 they could contain at various locales around the Martian globe.

This an interesting astrobiological question. Life as we know it doesn't necessarily need oxygen; the earliest Earth organisms were anaerobic, after all, as is a huge chunk of the planet's modern microbial diversity. But oxygen is such a rich energy source that its availability makes possible many interesting evolutionary pathways, such as the rise of complex plant and animal life. (Nearly all known multicellular species here on Earth breathe oxygen in some fashion.)

The researchers found that Martian brines could hold a lot of oxygen — enough to support aerobic microbial life pretty much everywhere, if the requirements of these hypothetical Mars bugs mirror those of Earth. And the models showed that dissolved-oxygen capacity varies greatly both over time and from place to place, because it depends on temperature and, to a lesser extent, pressure. (The temporal variation is tied to shifts in Mars' obliquity — the tilt of its axis of rotation.)

Colder temperatures promote greater oxygen entry into brines. So, especially frigid pockets near the Martian poles could potentially be oxygen-rich enough to support complex multicellular organisms such as sponges, the researchers determined. Such "aerobic oases" may be common today above 67.5 degrees north latitude and below 72.5 degrees south latitude. [Photos: The Search for Water on Mars]

Astrobiologists therefore shouldn't turn their noses up at extremely cold environments just because relatively warm ones tend to be better for life as we know it here on Earth, Stamenković said.

"Each environment has its own pros and cons," he told Space.com.

There is some observational evidence to back up the new modeling results, study team members said. For example, the Curiosity rover has spotted manganese oxides during its exploration of Mars' 96-mile-wide (154 kilometers) Gale Crater.

It takes a lot of dissolved oxygen to produce these minerals, Stamenković said. Here on Earth, he added, manganese oxides formed only after O2 began persisting in the atmosphere about 2.5 billion years ago — a milestone known as the Great Oxygenation Event (GOE).

"Our model says that [manganese oxide formation] is possible to occur on Mars, because of the briny environment and the low temperatures," Stamenković said.

The GOE was tied to the rise of oxygenic photosynthesis, which produces virtually all of the oxygen in Earth's air today. There's only a small amount of abiotically produced oxygen in Mars' air, but that doesn't mean that none of the stuff can make it into buried brines. For instance, in addition to the trace atmospheric oxygen, radiation emitted by radioactive elements in Martian rocks could split water molecules into their constituent hydrogen and oxygen, Stamenković said.

Indeed, radiolysis and/or other processes may have been important players for nearly all of the Red Planet's history, raising the possibility that Mars life — if it ever arose — has had access to energy-rich oxygen for billions of years. And the same may be true on other worlds with chilly habitable environments, such as the buried-ocean moons Europa and Enceladus (which orbit Jupiter and Saturn, respectively), Stamenković said.

"There are so many abiotic ways of creating small but sufficient amounts of oxygen which then, at the colder temperatures, can be absorbed effectively, and could actually maybe trigger evolution in a different way than we got on the Earth," he said. "This is all hypothetical, but worth exploring."

Both NASA and the European Space Agency (in partnership with Russia) aim to launch life-hunting rovers toward Mars in 2020. But both of those robots will be hunting for signs of past life. The last, and so far only, spacecraft to look for present-day Red Planet organisms on the Martian surface were NASA's twin Viking 1 and Viking 2 landers, which touched down in 1976.

Stamenković would like for that to change, and he said he hopes the new study — which was published online today (Oct. 22) in the journal Nature Geoscience — provides a little momentum in that direction.

"There is still so much about the Martian habitability that we do not understand, and it's long overdue to send another mission that tackles the question of subsurface water and potential extant life on Mars, and looks for these signals," he said.