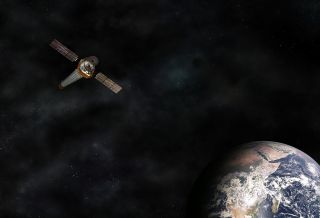 One of NASA's marquee space telescopes won't be sidelined for much longer.

The Chandra X-ray Observatory went into a protective safe mode Wednesday (Oct. 10) because one of its orientation-maintaining gyroscopes was on the fritz, NASA officials announced today (Oct. 15). That glitch caused the spacecraft to gather 3 seconds' worth of bad data, confusing the onboard flight computer.

With the problem identified, a fix is just around the corner. [Our X-Ray Universe: Amazing Photos by NASA's Chandra X-Ray Observatory]

"The team has completed plans to switch gyroscopes and place the gyroscope that experienced the glitch in reserve," NASA officials wrote in a statement today. "Once configured with a series of pre-tested flight software patches, the team will return Chandra to science operations, which are expected to commence by next week."

Chandra has far outlasted its original five-year design lifetime; the scope has been observing the universe in high-energy X-ray light since 1999. Chandra has made many important contributions during its nearly two decades of life — helping astronomers identify a new class of "intermediate-mass" black holes, for example, and imaging the shock waves emanating from supernova explosions.

CGRO was intentionally deorbited in 2000 after a gyroscope failure. Hubble is currently in safe mode with gyro issues of its own, though NASA officials have expressed optimism that the iconic telescope will be back online soon.

Spitzer is still going strong in an extended mission.