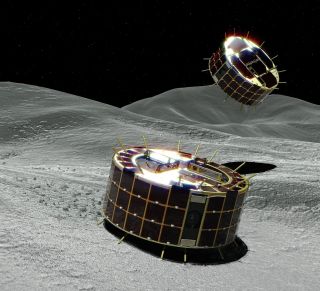 Artist's illustration of Hayabusa2's hopping rovers, MINERVA-II1A (back) and MINERVA-II1B (foreground), exploring the surface of the asteroid Ryugu. Both rovers are scheduled to land on Ryugu on Sept. 20, 2018.
(Image: © JAXA)

A Japanese asteroid-sampling probe is about to get up close and personal with its target space rock.

The Hayabusa2 spacecraft will drop two tiny rovers onto the asteroid Ryugu this week, possibly as early as Thursday (Sept. 20), if all goes according to plan.

The Hayabusa2 team began prepping seriously for the epic maneuver last week. The current schedule calls for the mother ship to descend toward Ryugu today (Sept. 19) and for the two little disk-shaped robots, known as MINERVA-II1A and MINERVA-II1B, to deploy as early as tomorrow, U.S. time. (Officials with the Japan Aerospace Exploration Agency, or JAXA, have cited Sept. 20 and Sept. 21 for these events, but that's apparently on Japan time, which is 13 hours ahead of U.S. Eastern Daylight Time.) [Japan's Hayabusa2 Asteroid Mission in Pictures]

Each MINERVA-II rover measures 7 inches wide by 2.8 inches tall (18 by 7 centimeters), with a mass of about 2.4 lbs. (1.1 kilogram). And they won't "rove" in the traditional sense; instead of rolling along on wheels like a Mars or moon explorer, the duo will hop from place to place on Ryugu.

"Gravity on the surface of Ryugu is very weak, so a rover propelled by normal wheels or crawlers would float upwards as soon as it started to move," Hayabusa2 team members wrote in a MINERVA-II1 description. "Therefore, this hopping mechanism was adopted for moving across the surface of such small celestial bodies. The rover is expected to remain in the air for up to 15 minutes after a single hop before landing, and to move up to 15 m [50 feet] horizontally."

The rovers will move autonomously, exploring multiple areas on the surface of the 3,000-foot-wide (950 meters) Ryugu, the update added. The duo will gather a variety of data with their science gear, which includes temperature sensors, optical sensors, accelerometers, gyroscopes and a total of seven cameras that are shared by the two rovers.

The upcoming touchdowns kick off an extended surface-exploration campaign for the $150 million Hayabusa2 mission, which launched in December 2014 and arrived in orbit around Ryugu on June 27 of this year. Hayabusa2 is scheduled to drop a larger lander called MASCOT onto the asteroid next month, and another little hopping rover, MINERVA-II2, next year.

And the Hayabusa2 mothership will make several forays of its own to the surface next year, grabbing Ryugu material each time. The orbiter will leave Ryugu in December 2019, and its samples will return to Earth in a special capsule a year later.

Scientists will study this returned dirt and rock in detail to learn about the early history of the solar system, and the role asteroids may have played in helping life get going on Earth, mission team members have said.

MINERVA-II stands for "Micro Nano Experimental Robot Vehicle for Asteroid, second generation." The first-generation rover flew aboard the original Hayabusa mission, which arrived in orbit around the asteroid Itokawa in September 2005. In a historic first, Hayabusa returned a tiny sample of Itokawa to Earth in 2010. But its MINERVA hopper did not land successfully on the space rock.

Hayabusa2 isn't the only asteroid-sampling mission operating right now. NASA's OSIRIS-REx probe is closing in on its target, the 1,640-foot-wide (500 m) near-Earth asteroid Bennu. OSIRIS-REx is scheduled to arrive in orbit around Bennu on Dec. 31 and return samples of the space rock to Earth in September 2023.