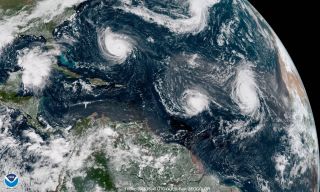 Hurricane Florence, Tropical Storm Isaac and Hurricane Helene swirl in the Atlantic Ocean in this image captured by the GOES-East weather satellite on Sept. 11, 2018, at 11:45 a.m. EDT (1545 GMT).
(Image: © NOAA/GOES-East)

As three powerful storms march one by one across the Atlantic Ocean toward the U.S. East Coast and the Caribbean, a fourth is getting ready to roll over the Hawaiian Islands. Meanwhile, the National Oceanic and Atmospheric Administration's GOES weather satellites are providing some spectacular views of the group storms from space.

The GOES-East weather satellite, which keeps a constant eye on the East Coast and the Atlantic, has captured some breathtaking images of Hurricane Florence, Tropical Storm Isaac and Hurricane Helene approaching the Americas (in that order).

Florence, a potentially life-threatening Category 4 hurricane, is on track to make landfall in North Carolina or South Carolina on Thursday (Sept. 13). [Hurricane Florence in Photos: See the Massive Storm from Space]

On the right side of this view is Helene, a Category 2 hurricane that will likely peter out in the Atlantic without making landfall, according to the latest update from the National Hurricane Center (NHC), a division of NOAA.

About halfway between Hurricane Florence and Hurricane Helene is the small but dangerous Tropical Storm Isaac, which was downgraded from hurricane status early this morning (Sept. 11).

Far from this hurricane parade on the other side of the globe, Tropical Storm Olivia is flying solo east of Hawaii. A Category 4 hurricane at its strongest, Olivia spent about a week swishing around in the Pacific Ocean without making landfall before it weakened into a tropical storm.

You can find the latest updates on these tropical storms and hurricanes at nhc.noaa.gov. For more general information on the 2018 Atlantic hurricane season, check out this hurricane season guide by Live Science, a Space.com sister site.