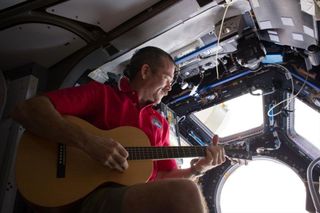 LONGUEUIL, Quebec — It's been five long years since Canada had an astronaut in space, so there was a gaggle of journalists here at the Canadian Space Agency (CSA) headquarters eager to talk to the next Canadian space flyer.

Last Thursday (Sept. 6), astronaut David Saint-Jacques was on a big screen in front of Canadian reporters who were participating by teleconference as he spoke to an audience in Houston about his upcoming spaceflight in December, when he will join Expedition 58/59. A half dozen Canadian journalists lined up at the mic to ask him questions, ranging from how he plans to record his memories to what his thoughts were on a recent leak on a Russian spacecraft docked to the space station.

It's the biggest space party for Canada since the landing of Canadian astronaut Chris Hadfield, who became world-famous practically overnight during his 2012-2013 mission. He was equally as comfortable playing (and singing) David Bowie's "Space Oddity" as he was commanding the space station. [15 Space Travel Tips from Astronaut Chris Hadfield]

While running the most scientifically productive mission of his time, Hadfield invested massive amounts of personal time in social media and quickly had celebrities chatting with him, including several "Star Trek" stars.

But Hadfield retired from spaceflight just weeks after his return to Earth, leaving astronaut public engagement in the hands of four newer Canadian astronauts in the corps today. So, can the CSA expect an encore with Saint-Jacques?

In an interview with Space.com, Saint-Jacques acknowledged Hadfield's talent at engaging the public and said he would do his best to bring spaceflight to the masses — but with his own experiences and perspectives.

"I intend to do the same thing he did, to share my perceptions on spaceflight and what it means to me," Saint-Jacques said after the news conference.

Saint-Jacques said his focus will be to show what it's like to live on the space station; it will be his home for about half a year. So his social media posts will focus on the human experience and showing the beauty of our home planet.

There is a groundswell of support for Saint-Jacques in his home province of Quebec, and he has received extensive coverage by French journalists there in recent weeks. When Saint-Jacques served as a backup astronaut for the Expedition 56 launch in June, four Canadian journalists traveled to Kazakhstan to see him. [Editor's note: One of those journalists was Space.com contributor Elizabeth Howell, who wrote this story.]

The CSA also hosted a media day in Moscow in August to let reporters observe Saint-Jacques' training. The event received such high demand that several journalists never made it off the waiting list.

Saint-Jacques said he was humbled by the attention and glad that Canadians are paying attention to him and the space agency's work. "When you're training, you're in your own bubble, and you really just see your fellow crewmembers and family," Saint-Jacques said. But in Kazakhstan, for example, the backup crew temporarily had fewer responsibilities and had a chance to appreciate the attention. Saint-Jacques said it meant a lot to him to see the journalists and to answer questions on-site about his mission. [What It's Like to Snag a Spacecraft with the International Space Station's Robotic Arm]

But how will Saint-Jacques measure up to Hadfield in popularity and engaging the public?

To be sure, Saint-Jacques stands out on his own. His technical competence is unquestionable, as he will fly the tricky co-pilot seat on the Soyuz spacecraft on his very first flight. His work history prior to being an astronaut includes roles in medicine, astronomy and engineering — all demanding fields. Saint-Jacques speaks five languages and even has a comedian's knack for wit in at least two (English and French). (When Hadfield first emerged from the tight quarters of his spacecraft during landing in 2013, Saint-Jacques quickly quipped to a crowd at the CSA watching the video, "It's a boy!")

But several CSA officials said Hadfield's extraordinary popularity was probably unique. Hadfield knew how to not only run a space station but also entertain as a showman. However, officials asked space fans to be patient, because Saint-Jacques is charming on his own.

Canadian ISS Director Ken Podwalski has closely watched the careers of several Canadian astronauts, including Saint-Jacques. "David seems to be more of the studious, mindful type," Podwalski said, pointing to the various academic degrees that Saint-Jacques possesses. So, Podwalski said, Saint-Jacques will likely focus more on the technical aspects of spaceflight, although Saint-Jacques does have Facebook and Twitter presences of his own and will use social media.

The CSA communications team is also planning education campaigns about Canadian work in space in general, because Saint-Jacques' flight represents an opportunity to promote the country's role in the International Space Station and (possibly) in the upcoming Deep Space Gateway moon-orbiting space station. Journalists on Thursday were given a quick tour of the Canadarm2 robotic-arm simulator and several rovers that are being tested for future expeditions on the moon and Mars, which represent some of the other contributions Canada makes to space.

Canadian astronaut Jeremy Hansen pointed out at the same press event that Saint-Jacques had nine years to build up relationships with journalists ahead of his first mission, and those relationships will benefit him in spaceflight. Hadfield had help in his public outreach; the CSA communications team and journalists' reports of Hadfield's exploits also contributed.

"For all of us here at the Canadian Space Agency, that [public engagement] is actually near and dear to our hearts," Hansen told Space.com "We believe we are part of something very special, and we believe the benefits to the community are significant."

Hansen added that a large part of public engagement is also luck, because sometimes, the public is distracted by other news. And it also depends on the person transmitting the message. Hansen said Hadfield had several skills that made him a good spokesperson.

"He's an excellent communicator," Hansen said. "He's good at connecting with people. He's an entertainer. These were all things that were leveraged to help inspire Canadians and share an important message."

Canada is one of the smaller contributors to the space station program; because spaceflights are based on contributions to the station, the agency's astronauts fly only occasionally. Besides Saint-Jacques and Hansen (both of whom were selected in 2009), Canada has two newer astronauts selected in 2017 who are in basic training right now: Jenni Sidey-Gibbons and Joshua Kutryk. They are expected to wrap up that astronaut candidate training in roughly a year and fly sometime in the 2020s.