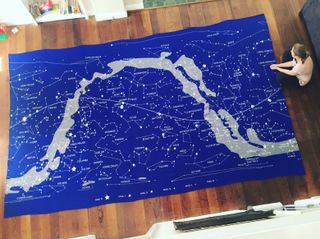 By hacking a domestic knitting machine, a software engineer advanced modern knitting and made a massive equatorial star map in tapestry form.

Australian software engineer Sarah Spencer spent years hacking and programming a 1980s domestic knitting machine for fun. This hobby grew into much more, however, as Spencer developed a new computer algorithm that did something never before accomplished with such machines. Her accomplishment — knitting with bird's-eye backing using one knit per pixel in three colors — might not mean much to anyone outside of the knitting community. But this achievement allowed Spencer to make something truly out of this world.

"As a woman in tech, I wanted to create something which would engage young minds in an area of STEM (science, technology, engineering, mathematics)," Spencer said in a statement emailed to Space.com. So, with her souped-up knitting machine, Spencer set her sights on Electromagnetic Field Camp (also known as EMF Camp), a geeky festival in the United Kingdom focused on tech and creativity. She aimed to create an astronomy-based piece to showcase at the event. [Constellations of the Night Sky: Famous Star Patterns Explained (Images)]

At 6 p.m. GMT on Aug. 31 at EMF Camp, Spencer unveiled the fruits of her labors — "Stargazing: a knitted tapestry." The piece features all 88 constellations as seen from Earth, as well as the equatorial line with the zodiac constellations running along it, stars scaled according to their real-life brightness, the Milky Way galaxy, the sun, Earth's moon and all of the planets within our solar system. Spencer made sure to put the planets, sun and moon in specific, strategic positions so that the heavenly bodies indicate a specific date in time.

Spencer entered "Stargazing" into REAio, a hackathon at REA Group in Melbourne, Australia. With a team of 18 excited hackers, Spencer electrified the tapestry, lighting up eight of its constellations. While the engineer said she hopes to one day light up all of the constellations on "Stargazing," successfully electrifying some of them snagged the Marvin award for Technical Excellence at the hackathon.

Spencer hopes that "Stargazing" "inspires EMF Camp attendees to go out and look up at the stars," she told Space.com in an email.

"Stargazing: a knitted tapestry" consists of locally sourced Australian wool that matches the blue color of the outfits of the accomplished Australian women depicted in portraits on display as part of the 2018 Archibald Prize at the Art Gallery of New South Wales, Australia. Spencer wanted her universe to be "dressed in a similar ultramarine blue to celebrate the achievements of all women in the fields of science," she said in the statement.