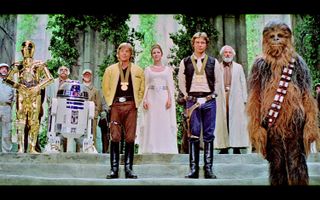 In the first "Star Wars" Fan Awards, loyal fans of the intergalactic saga have a chance to showcase their creative talents and display their love for a galaxy far, far away.
(Image: © Lucasfilm)

Calling all "Star Wars" mega fans! The 2018 "Star Wars" Fan Awards contest has been underway for a while, but there's still time to get creative and submit your best fan work for a chance to win the ultimate prize.

Through this contest, "Star Wars" fans can show off their creativity and their love for the galaxy far, far away. Fans can showcase everything from their cosplay work to their filmmaking chops by submitting an original film, a piece of visual art or a photo. Fans have until Sept. 17 to submit their work, and each category has several subcategories in which fans can claim first prize. Winners will receive a "Star Wars" prize pack containing a plethora of merchandise and, of course, a shiny trophy they can display for bragging rights. In the end, thirty-four fans will go home victorious.

This contest stems from the longstanding "Star Wars" Fan Film Awards, which has highlighted fan filmmaking for many years. But this year, in the contest's inaugural year, the "Star Wars" Fan Awards will have categories in both short and long films but will also allow for fans to express their creativity and love through visual art and photos. ['Star Wars'! 40 Surprising Facts from a Galaxy Far, Far Away]

In the short film (up to 15 seconds) and long film (up to 5 minutes) categories, winners will be chosen for best choreography, best animation, best comedy, best visual effects, best stop-motion, filmmaker select, spirit of fandom and audience choice. But what if your video is hilarious but lacking in visual effects? No worries. The number of categories will give fans with a wide variety of skills and talents an opportunity to win.

A few Lucasfilm pros have even stepped in to give fans helpful tips to ensure that their entries get the attention of the judges. Amy Beth Christenson, art director for the "Star Wars Resistance" series, offered this advice for fans unsure of their technical skill. "Great art is more about the idea than the execution," she said. "Find that hook, find that original and inspired idea. As long as you have enough skill to get that across visually, people will always have a stronger response to a unique interpretation over a photo-realistic rendering or an elaborately detailed piece."

Creative "Star Wars" fans have just a few more weeks to make sure their work is out of this world, but it's not yet clear whether or not judges will favor entries from the Rebel Alliance or the Empire.

Tag @Spacedotcom on social media with the creation that you're submitting!