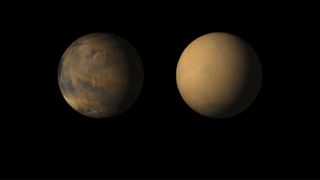 Opportunity hasn't made a peep since June 10, when dust in the Red Planet's air got so thick that the solar-powered rover couldn't recharge its batteries. Opportunity's handlers think the six-wheeled robot has put itself into a sort of hibernation, and they still hope to get a ping once the dust storm has petered out.

And there are good reasons for this optimism, NASA officials said. [Mars Dust Storm 2018: How It Grew & What It Means for the Opportunity Rover]

"Because the batteries were in relatively good health before the storm, there's not likely to be too much degradation," NASA officials wrote in an Opportunity update Thursday (Aug. 16). "And because dust storms tend to warm the environment — and the 2018 storm happened as Opportunity's location on Mars entered summer — the rover should have stayed warm enough to survive."

The dust storm began on a regional scale in late May and had grown into a planet-encircling monster by June 20. The storm began dying down late last month, but there's still a lot of dust in the air — probably too much for Opportunity to start recharging its batteries.

Scientists track the amount of dust in the Martian atmosphere using a measurement of opacity called "tau." The lower the tau, the clearer the air. The air in Opportunity's neck of the woods — the rim of the 14-mile-wide (22 kilometers) Endeavour Crater — typically has a tau of about 0.5, NASA officials said. The rover's last recorded measurement, on June 10, tagged it at a whopping 10.8.

The tau probably needs to be less than 2.0 for enough sunlight to get through to start charging the rover's batteries, mission team members said. Over the past week or so, the estimated tau in the Endeavour Crater region has ranged from around 2.1 to 2.5, they added.

Engineers are trying to communicate with Opportunity several times a week using NASA's Deep Space Network, a system of big radio dishes around the globe. They hail the robot during scheduled "wake-up times" and then listen for a response. And team members are casting a wider net, too: Every day, they sift through all radio signals received from Mars, listening for any chirp from Opportunity, NASA officials said.

Even if Opportunity does eventually wake up and re-establish contact, its long ordeal may end up taking a toll on the rover.

"The rover's batteries could have discharged so much power — and stayed inactive so long — that their capacity is reduced," NASA officials wrote in the update. "If those batteries can't hold as much charge, it could affect the rover's continued operations. It could also mean that energy-draining behavior, like running its heaters during winter, could cause the batteries to brown out."

The golf-cart-size Opportunity landed on Mars in January 2004, three weeks after its twin, Spirit. Both robots embarked on three-month missions to search for signs of past water activity on the Red Planet. The duo found plenty of such evidence, and then kept exploring Mars for years after their warranties expired.

Spirit finally got bogged down in a Martian sand trap in March 2010. The rover couldn't reorient itself to catch the sun, and it froze in the ensuing winter. NASA declared Spirit dead in 2011.

NASA's other active Mars rover, the car-size Curiosity, is nuclear-powered and is therefore far less affected by the dust storm.

If you'd like to send your well-wishes to Opportunity and the mission team, you can do so using the "postcards" at this mission site.