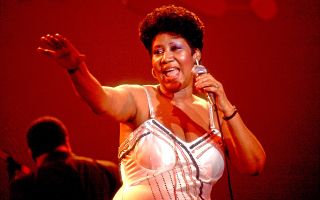 Aretha Franklin performs on stage at the Park West auditorium in Chicago on March 23, 1992. Franklin, the "Queen of Soul" and champion of civil and women's rights, died on Aug 16. 2018. 249516 Aretha, an asteroid that NASA named after her, continues to travel in our solar system even after her passing.
(Image: © Paul Natkin/Getty)

A pioneer and a legend by many definitions, R&B singer and "Queen of Soul" Aretha Franklin died today (Aug. 16) at the age of 76. But, as we collectively mourn Franklin's loss, an asteroid named after her sails on, orbiting beyond Mars.

To honor the late singer at the time of her passing, NASA tweeted a reminder that asteroid 249516 Aretha — discovered on Feb. 15, 2010, by NASA's NEOWISE spacecraft and named in celebration of the Queen of Soul — is still orbiting beyond Mars, proudly carrying on its iconic namesake.

"We're saddened by the loss of Aretha Franklin," NASA officials tweeted. The space agency paid homage to the Queen of Soul and reminded everyone that her asteroid is still going strong.

Today, Franklin lost her battle with pancreatic cancer. But she leaves behind an unforgettable legacy. In addition to having one of the best voices of all time, Franklin was a champion for civil rights and women's rights, paving the way for countless people after her.

Aside from highlighting the asteroid to honor the iconic artist, NASA also celebrated Franklin from the moon (on Twitter) today. NASA's official account for Earth's moon, expressed its condolences for Aretha, tweeting "Rock Steady Aretha. From your steady rock out in space."

While the Queen of Soul has passed, she will not be forgotten here on Earth or in space, as asteroid 249516 Arethacontinues to orbit and travel in our solar system.