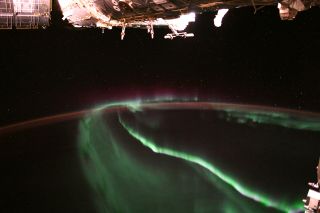 The aurora as seen from the International Space Station by astronaut Alexander Gerst.
(Image: © ESA/NASA-A. Gerst)

Most of us are lucky to catch a glimpse of a stunning aurora painting the skies once or twice in our lives.

But living on the International Space Station has a curious side effect, giving astronauts incredible odds of spotting the beautiful phenomenon. European Space Agency astronaut Alexander Gerst has been aboard the space station since June as part of his second trip to space, and on Aug. 10, he shared incredible photos of the bright green waves as seen from above. "Mind-blowing, every single time," he wrote in a tweet accompanying the photo.

Auroras, also known as the northern and southern lights, are caused by charged particles streaming out of the sun that eventually hit Earth's atmosphere, according to NASA. There, the particles interact with oxygen and nitrogen molecules to produce light. The result is a ghostly green wave dancing across the sky near the poles.

But while auroras are beautiful, particles streaming off the sun can have plenty of less aesthetic consequences. They can put astronaut health at risk, damage satellites in orbit around the Earth and, in the most severe cases, cause blackouts in terrestrial power grids.

That's part of why NASA is so excited about its newest mission, the Parker Solar Probe, which launched toward the sun on Sunday (Aug. 12). Once the spacecraft arrives at our star later this year, it will study the highly charged particles that leave the sun and end up in our neighborhood.

Parker can't give us more auroras, but if it can help scientists better understand and predict the sun's activities, it might help people be in the right place at the right time to see the stunning view.