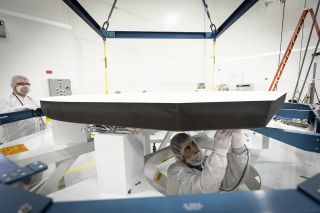 Parker Solar Probe's heat shield will reflect as much of the sun's energy as possible away from the spacecraft as it approaches, as well as minimizing heat convection with two panels of superheated carbon-carbon composite surrounding a carbon foam core.
(Image: © Ed Whitman/NASA/Johns Hopkins APL)

NASA is preparing for its next big mission: getting up close and personal with the sun. And to do so, the agency needs a killer heat shield.

As part of this daring mission, a robotic explorer called the Parker Solar Probe will reach out and touch the sun — well, sort of. The sun is a broiling ball of plasma that lacks any sort of solid surface, so instead of reaching something "touchable," the probe will fly into the sun's outer atmosphere, known asa the corona. (This is the shimmering, hazy atmosphere we see during a solar eclipse.) Over the next seven years, the car-size craft will make 24 swoops as it gradually spirals into the sun, coming closer to the solar surface than any probe has before.

In the corona, temperatures can reach a sweltering 2 million degrees Fahrenheit (about 1 million degrees Celsius), while the photosphere — what we perceive as the surface of the sun — is only around 10,000 degrees F, or 5,500 degrees C (which is about 300 times cooler than the corona above). Due to the scorching heat, any ordinary spacecraft would have trouble getting close enough to capture a complete picture of the corona's activity without burning up (or melting). [In Photos: NASA's Parker Solar Probe in the Clean Room]

Designed and built by Johns Hopkins University's Applied Physics Lab (APL), the $1.5 billion Parker Solar Probe project is humanity's first mission to study a star. Next month, with a launch window starting Aug. 11, the solar probe will embark on its seven-year journey to explore the sun's outer atmosphere. Data collected by the spacecraft will fill in many gaps in our knowledge of the sun (and other stars) by helping scientists understand why the sun behaves the way it does.

But to do so, the craft must survive its close encounter with the sun. "The sun is hot, so you have to not melt," Nicholeen Viall, an astrophysicist at NASA's Goddard Space Flight Center in Greenbelt, Maryland, told Space.com in a phone interview. The statement may sound simple enough, but in reality, the probe's thermal-protection system took nearly a decade to develop.

The idea of using solar arrays to power a spacecraft bound for the sun seems like an obvious way to send the craft on its journey. But the concept proved to be tricky to execute, because engineers had to ensure that the panels wouldn't be destroyed by the sun's intense heat. It turns out that the real trick to protecting the probe hinges on the difference between temperature and heat, as well as the density of space.

As NASA explained in a new video, temperature is a measurement of how fast particles are moving, while heat measures how much energy those particles actually transfer. In space, you can have fast-moving particles that don't transfer a lot of heat because there's a lot of space between those particles.

While the corona is a sweltering several million degrees in temperature, its atmosphere is so diffuse that the brunt of the heat emanating from the sun will not come from the atmosphere, but rather from the surface. Nicky Fox, a mission project scientist at APL, dtold Space.com that flying through the corona is like sticking your hand in an oven — you'll feel the searing heat but won't get burned unless you touch the oven's surface.

To guard against the sun's brutal environment, the Parker Solar Probe will fly with its heat shield pointed at the sun at all times. Referred to by team members as a "giant Frisbee," the craft's heat shield is a technological marvel that took a decade to develop.

The heat shield is composed of a 4.5-inch-thick (11.4 centimeters) carbon-foam core that is 97 percent air sandwiched between two solid panels of superheated, carbon-carbon composite, similar to the graphite epoxy used in golf clubs and tennis rackets. The sun-facing side is covered in a coat of brilliant white ceramic paint to help deflect as much of the sun's light as possible. Measuring 8 feet (2.4 meters) in diameter and weighing just 160 lbs. (73 kilograms), this heat shield is all that stands between the sun and the delicate instruments below it, researchers told Space.com.

Thanks to some crafty engineering, the science team can rest assured that, when it flies close to the sun, the probe won't suffer the same fate as Icarus. (In this Greek tragedy, Icarus' wings melted when he flew too close to the sun, sending him plunging to his death.) Betsy Congdon, APL's lead engineer working on the heat shield, told Space.com that the probe's heat shield has its own superpower: The hotter it gets, the better it works. This is great news for the probe, since it will face grueling temperatures of 2,500 degrees F (1,370 degrees C) — more than 400 times as intense as what Earth-orbiting spacecraft endure — while the sensitive instruments underneath will enjoy a balmy 85 degrees F (29 degrees C).

The probe will be protected by more than just its specially designed heat shield; it is also outfitted with cooling pumps, radiators and a solar proximity-alert system, making it one of the toughest spacecraft ever flown. Exposed to the full force of the sun, the shield's surface will get blasted with more than 2 million watts of solar energy. If all goes according to plan, the instruments, which stay safely tucked behind the heat shield, are subjected to only about 20 watts, less than half the energy needed to light a 60-watt bulb. Only a few brave instruments will face the sun head-on.

Those instruments, like the probe's solar cup — designed to catch charged particles — are fashioned out of protective materials able to withstand the sun's intense heat and radiation, Justin Kasper, principal investigator for the SWEAPS instrument suite, explained in a news release. (The Solar Wind Electrons Alphas and Protons, or SWEAPS for short, instrument suite includes the solar cup and will directly measure the sun’s plasma).

But even that's not enough to protect the probe from the sun's fury. It also packs an active cooling system, much like the radiator in your car. Like most interplanetary probes, the Parker Solar Probe is solar-powered; the sun's energy is free, and solar panels are relatively inexpensive to build and launch. But due to its close proximity to our star, the probe could end up with too much of a good thing.

Traditional solar panels stretch out on either side of a spacecraft like wings on a bird. Hoping to soak up as much energy as possible, these fixtures are always extended. But that's not possible for the Parker Solar Probe, as it's close encounter with the sun would fry outstretched panels. Consequently, this spacecraft is equipped with a unique feature: Its solar panels have articulated arms with joints resembling shoulders. This allows the probe to easily tuck them behind the heat shield when the radiation becomes too intense.

The probe's onboard computer is constantly calculating the spacecraft's energy needs so that it can determine how much of the panels to expose at any given time. It may seem odd, but solar panels don't really like heat, the researchers said. So, to prevent overheating, the panels are built with vein-like chambers for water to flow through. The Parker Solar Probe is carrying a gallon of demineralized water, which flows through the panels and into four cone-shaped radiators, dissipating heat in the process. It's a closed system, so water is never lost to evaporation.

When we think of solar power, we might consider the sun's heat, but rarely do we consider what happens to a spacecraft when it's away from the sun's heat. Designing a spacecraft to survive in both intense heat and intense cold is quite challenging, Congdon said; to help it survive the chilly expanse of space when it's out of the sun's spotlight, the probe also carries heaters.

It takes 8 minutes for light to reach Earth from the sun, so that means that communication with the spacecraft is delayed. Congdon said that once it leaves Earth, the probe will be on its own, so it has to be fully autonomous. That means that, to keep the spacecraft's heat shield facing the sun, the onboard computer needs to be pretty smart. So, the team outfitted the craft with a special set of solar limb sensors — a first-alert system — that will tell the spacecraft if it drifts off-kilter and needs to adjust. "We don't actually joystick that around," Congdon said. "That's autonomy."

Congdon said this mission has certainly proved to be very challenging from an engineering perspective, tbut it's also been incredibly rewarding. "We're all standing on the shoulders of the giants who came before us," she told Space.com. "There have been thousands of people working on this project over the decades — I'm just one engineer helping to make their dreams come true."