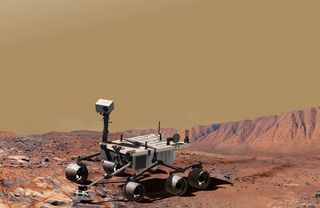 PASADENA,Calif. -- Proposals for a multibillion dollar Mars sample return mission ?perhaps even a comprehensive sample return program ? appear to be on the frontburner again, but not without controversy.

It turnsout, Alan Stern, NASA?s new associate administrator for the Science MissionDirectorate, is a big proponent of Marssample return. But while many NASA planetary scientists share thatsentiment, a number of others also worry that such an ambitious mission ? Sternestimates it could cost from $3 billion to $4 billion ? would suck up all the availablemoney for mostother Mars missions in the next decade and disrupt NASA?s ability to sendat least one robotic mission to Mars every two years.

The Marssample return program and related proposals for the early caching of Marssamples were big topics at the Seventh International Conference on Mars, heldhere July 9-13 at the California Institute of Technology. The meeting broughttogether some 500 leading experts on the red planet to discuss current andfuture exploration plans.

In a July 10long-distance telephone hookup between meeting attendees and Stern, he advisedthat the Mars sample return undertaking would require ?focus and discipline? tolocate requisite funds for the effort within the agency?s budget.

Stern saidhe is personally looking at the 2018-2020 time period for Mars samplereturn activities. To help fund the initiative, he proposed skipping one Mars mission opportunity sometime during the next decade.

Stern alsois backing use of the nuclear-poweredMars Science Laboratory to practice caching Mars specimens. That largerover is under development here at the Jet Propulsion Laboratory. Putting acaching capability on the Mars Science Laboratory rover, Stern said, would helpbuild the foundation of support for future Mars sample return activities, notonly in scientific and public circles, but also in Congress and the White HouseOffice of Management and Budget.

?I thinkthere?s something concrete about putting your stake in the ground,? Stern toldthe meeting attendees.

Stern hasasked a tiger team at NASA?s Ames Research Center in Mountain View, Calif., todesign sample caching gear to be installed on the Mars Science Laboratory. Asmall, hockey puck-sized device is being studied, seen as a ?secondary payload?to be attached to the rover.

The finalstudy results from the Ames team on the caching hardware are due by the end ofJuly or early August, reported Chris McKay, a planetary scientist at the spaceagency field center who is helping to assess the feasibility of the MarsScience Laboratory add-on. Preliminary discussions also are under way withofficials in the European Space Agency?s ExoMars rover project to carry similarsample caching equipment on board that 2013 mission.

These NASAand European Space Agency (ESA) rovers would collect bits of Mars during theirrespective exploration treks ? preparatory to the landing of a sample returncraft designed to gather, then rocketback to Earth a variety of select specimens of soil and rock from the redplanet.

?I thinkthere are things that we have to keep in mind as we move toward a sample returnprogram,? McKay told SPACE.com. ?It?s not going to just be a samplereturn. We?re going to have a series of sample returns. We have to think of itas a program. The first sample return ought to be a simple, pathfinder-likesample return ? a technology demonstration.?

Utilizingthe Mars Science Laboratory for caching samples collected by rovers would getpeople focused and thinking about sample return, McKay said. ?It ties samplereturn to the ongoing program. There?s a tendency to think of sample return assomething ?out there? ? it doesn?t need to be. It can be something in the Marsprogram,? he said.

McKay alsosaid the sample return program has to connect, ultimately, with humanexploration of Mars.

At the Marsconference, placing an expensive sample return activity on the explorationagenda, perhaps at the expense of other projects, sparked some anxieties.

?I?mcautiously optimistic,? said Philip Christensen, a leading Mars scientist andprofessor in the Department of Geological Science at Arizona State Universityin Tempe. ?I am concerned that the sample return mission would take over theMars program. If you put that mission too far into the future, with not much inbetween, then you lose a lot of momentum ? a lot of young talented scientistsand engineers,? he said.

Christensenadded that he sees ?a real serious challenge? in carving out enough money inthe near-term to pay for Mars sample return and still maintaina dynamic program.

?It?s goingto take a careful, delicate balance to be able to afford the sample return andyet maintain some measure of a program,? Christensen told SPACE.com atthe Mars meeting in Pasadena. ?I have no expectation that the program will beas dynamic and vigorous as it has been if we?re going to pay for a samplereturn. Something?s got to give. But at the same time you can?t just give upeverything.?

In a July17 phone interview, NASA?s Stern told SPACE.com that he has asked theMars Science Laboratory project to add sample caching to the mission rover?sduties. ?It?s a late but viable opportunity? and would explore techniques forfollow-on Mars sample return work, he said.

Stern saidhe also has requested that ESA consider adding the Mars Science Laboratorysample caching equipment to their ExoMars mission. He said that he will discussthe matter with Daniel Sacotte, ESA?s director of human spaceflight,microgravity and exploration in a meeting later this month at NASAheadquarters.

?I want tobe able to point up into the sky and say I already have a sample waiting upthere,? Stern said. ?I?m just opening possibilities.?

It is not agiven, however, that those pre-selected Mars samples would later be roboticallypicked up for return to Earth, Stern said.

That?s myanalysis, not my wish ? that?s my analysis of the way the politics will go,?Stern said.

Stern saidhe thinks that a $3 billion to $4 billion Mars sample return effort in 2018 isaffordable, although architecture studies that blueprint the concept must stillbe done before the agency can seek a formal start to a sample return programand budget for it.