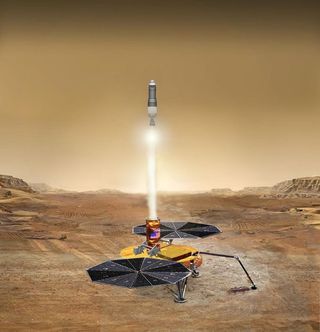 Artist rendering of liftoff on Mars of a sample return rocket. This proposed NASA mission is being eyed for next decade.
(Image: © NASA/JPL)

ALBUQUERQUE, New Mexico - A robotic mission to haul samples back from Mars to Earth should be on NASA's "most wanted" list, but a risk adverse space agency has left the project in limbo.

That's the view of Noel Hinners, a former NASA and industry leader that made the case for MSR at the Space Technology & Applications International Forum (STAIF), held here February 12-16 that brought together over 600 top experts to discuss a range of space exploration issues.

On the 30th anniversary of NASA's Viking landings on Mars in 1976, Hinners believes a commitment to the Mars Sample Return should be embraced as essential if humans are to safely explore and carry out fruitful work on that planet.

Bringing back the goods from Mars by robotic means--designated as MSR--is still downstream in NASA thinking, Hinners said. While a high science priority for almost three decades, the U.S. has yet to commit to MSR, he said, with the project always a decade or more away in plans and "safely down far enough so it's just out of harm's way."

Hinners said that there's a lack of appreciation of the science that you can get from a sample return within the top management of NASA.

"That's nothing new...I've seen that before," Hinners added, drawing from his background as an ex-NASA associate deputy administrator and chief scientist for the agency, as well as past director of the NASA Goddard Space Flight Center and a recently retired executive from Lockheed Martin.

"Unless you are a geochemist, you don't quite understand what it is about a handful of, some would say, 'dirt and rock', that enables you to decipher the history of the planet," Hinners explained.

There are valuable lessons to be learned by turning back the pages of space history to the dual Viking orbiters and twin Mars landers of 1976.

All Mars missions in that time frame were, properly, viewed as incredibly challenging technically and scientifically, Hinners remarked. Soft-landing with science experiments to search for life on a planet whose atmosphere, surface and environment were largely unknown "was viewed as verging on insanity"...yet the Viking missions succeeded, he said.

Hinners said that Viking exhibited, what he tagged, the seven habits of highly successful projects:

There is both a science imperative and exploration need for rocketing specimens off Mars and shooting them back to Earth.

First of all, Hinners pointed out, much critical science cannot be done remotely at Mars.

While the work of the Spirit and Opportunity Mars rovers is exemplary, they lack the ability to carry out precision age dating of martian materials, evaluate isotopic geochemistry, gauge trace element abundances, perform detailed mineralogy, and search for nano-biology.

"You've got to get these materials back here in terrestrial labs," Hinners said. Moreover, back-in-the-lab Mars samples are essential to Mars human exploration. For one, health and safety issues can be alleviated.

"Nobody in [their] right mind, and that doesn't preclude NASA from doing it, would send humans to Mars without having had samples back here first," Hinners argued. Additionally, MSR can help define what humans will do once they are footing around the planet, as well as show a sense of direction to the public, he suggested.

"Samples are forever," Hinners continued, underscoring the ability to apply new techniques and instruments to study extraterrestrial samples here on Earth - be they Apollo lunar specimens are the just returned interstellar and cometary particles snagged by Stardust.

What about the technological muscle to carry out a Mars Sample Return mission?

Hinners said that new technology needs for MSR is significantly less than Viking. MSR need not be nuclear powered as its mission would be short - in essence, perform a pick up and deliver service. However, there's need to become space savvy in gathering pre-selected samples, building a Mars ascent vehicle, then transferring in Mars orbit specimens to an Earth-return craft.

Past studies have scoped out these areas. New technologies are available. Other aspects of a Mars Sample Return mission already in hand, Hinners said. "There are budget issues...no doubt about that."

But the price tag could be spread out if MSR was viewed as an international project, Hinners said. In this regard, Europe, perhaps Japan and China, could be involved, he said, but cautioned against revisiting past U.S.-led international undertakings, such as the International Space Station.

"Bring the partners in early at the conceptual stage as part of the development of the concept. Make them an equal partner," Hinners said. "Our partners are very capable these days...equally capable to us."

For example, the European Space Agency (ESA) has placed Mars sample return as a key agenda item in their Aurora program. Meanwhile, ESA's Mars Express is circling the red planet with work green-lighted last year to build ESA's ExoMars rover. ExoMars is slated to be launched to Mars in 2011. Furthermore, the international science community sees robotic sample return from Mars as a high priority, Hinners explained.

"Let's celebrate this Viking 30th anniversary with a commitment to MSR," Hinners concluded. "It is equally challenging, equally achievable and it will be equally rewarding."