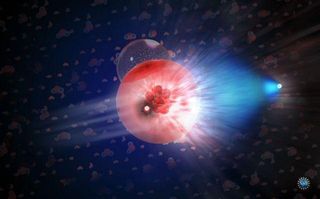 In this illustration, a neutrino has interacted with a molecule of ice, producing a secondary particle — a muon — that moves at relativistic speed in the ice, leaving a trace of blue light behind it.
(Image: © Nicolle R. Fuller/NSF/IceCube)

Yesterday (July 12), astronomers announced that, for the first time ever, they had traced a superfast cosmic neutrino to its source — an active galaxy known as TXS 0506+056, which lies 4 billion light-years from Earth.

The find implicates such active galaxies as a source of fast-moving charged particles called cosmic rays, which bombard our planet continuously. The origins of cosmic rays had puzzled researchers since the particles' discovery in 1912.

Although numerous telescopes helped track the neutrino, the key player in this story is the IceCube Neutrino Observatory, which detected the elusive "ghost particle" on Sept. 22, 2017. [Tracing a Neutrino to Its Source: The Discovery in Pictures]

IceCube consists of 86 "strings" of light detectors, which are encased deep beneath the ice at the South Pole. The facility wrapped up a seven-year construction project in 2010, though it was able to hunt for neutrinos while still being built.

Francis Halzen, a physicist at the University of Wisconsin-Madison, leads the project science team and is known as the "Godfather of IceCube." Space.com sat down with Halzen during an IceCube workshop in Atlanta this past May to discuss the history of the groundbreaking observatory (see Part 1 of this two-part Q&A) and the implications of the new discovery.

Space.com: So, what's the significance of this new discovery?

Francis Halzen: Less than five years ago, people discovered that there are cosmic rays that are one million times the energy of the beam of the Large Hadron Collider [LHC; the world's largest and most powerful particle accelerator]. It's a fascinating problem of how nature can do this. If [scientists] had to build an accelerator to accelerate the highest-energy cosmic rays, you would have to fill the orbit of Mercury with the LHC magnets. So this really is an interesting problem.

Here we are, 106 years after they made the discovery [of cosmic rays], and we have no idea where they came from. We have some guesses about how they may be accelerated, but we have no idea. So the meaning of TXS is that we now have one source after 106 years, and that's it.

That was the number-one item to justify giving us the money. IceCube was [built] to discover the source of cosmic rays. Neutrinos can only come from places where protons and their nuclei are accelerated. So by definition, when we make a map of neutrinos, we make a map of cosmic-ray accelerators.

The problem was that the map was uniform. We [detected] the neutrinos in 2013. But instead of what we expected, seeing [neutrinos from] our own galaxy first, we actually found extragalactic neutrinos first. We know that because we see the whole universe, [not just] the galactic plane. So we still didn't know what the sources were. We knew that we had a tool to find them.

Now we finally have a source.

Space.com: Will IceCube see more sources like TXS with the upcoming upgrade?

Halzen: TXS flashed once in 10 years. We know that because we have 10 years of data. Actually, there were two flashes, but only one player was really spectacular.

We sent an alert of one neutrino in September of last year. Fermi [NASA's Fermi Gamma-ray Space Telescope] told us that there's something special, a blazar, an active galaxy that's flaring. It has a flaring supermassive black hole. That created this avalanche of multimessenger observation [with telescopes searching in different wavelengths].

Once we knew where to look in the sky, we could go back and look at our last nine and a half years of data. Then we found this happened once before. It happened at the beginning of 2014, much more dramatically. Instead of having a flare that had only one spectacular neutrino, this flare has 12 to 14 neutrinos, depending on how you count, how you separate the signal from the background. This is really an incredible thing; we've never seen anything like it. [Gamma-Ray Universe: Photos by NASA's Fermi Space Telescope]

But it happened once in 10 years. Our best guess based on the one observation is that this happens once every 10 years. If you have 10 times the detector [size], you see [other blazars] flash once a year. So there will be a real bonanza once we are detecting. I think that, once we find more sources like this, we are going to do better.

Space.com: How did the 2014 observation originally get missed?

Halzen: It didn't get missed. That is an interesting story. It was incredible. One graduate student [Asen Christov] did the analysis and it was his thesis. He was looking for flares. He basically only looked at the highest sources on the map, and this was the second-highest, so nobody ever paid attention.

It's the look-elsewhere effect. If you look at 100,000 places in the sky, you're going to find something, just by statistics. These things got buried in statistics. However, Fermi told us where to look. We told Fermi, and then Fermi told us, this is interesting.

In his thesis, [Christov] had a list, and this was the second source. But even if I had looked, we didn't know enough astronomy. And even if we had said, that's TXS — which I would have never, ever matched — there was nothing special about that until Fermi pointed it out.

The reason I'm emphasizing this is, we couldn't have made this discovery alone. Fermi couldn't have made that discovery because they see flaring blazars all the time. It's only because we did this together. As far as I know, this is the first multimessenger event that could not have happened in any other way. No other experiment could have done this. No single telescope could have pulled this off. So it really shows the power of doing multimessenger astronomy.