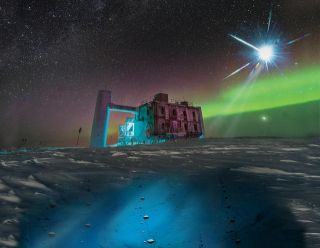 In this artistic rendering based on a real image, the IceCube Lab sits near the South Pole with the aurora streaming behind it. Below, frozen the ice, the lab's sensors are shown detecting neutrinos from a distant source.
(Image: © IceCube/NSF)

Every second, billions of subatomic particles wash over our bodies without interacting with us. While most of these particles are produced by the sun, the most powerful ones come from outside our galaxy. Now, for the first time, scientists have traced the powerful extragalactic particles back to their source, the bright center of a distant galaxy.

Although several telescopes played a role in identifying the source, the discovery was made possible when the IceCube Neutrino Observatory first detected the neutrinos.

The observatory began as a seven-year construction program that completed in 2010 and was hunting for particles while still under construction. It consists of 86 strings of detectors encased in the ice at the South Pole. [Tracing a Neutrino to Its Source: The Discovery in Pictures]

The project is led by principal investigator Francis Halzen, a researcher at the University of Wisconsin-Madison and a vigorous gentleman in his early 70s. Space.com sat down with Halzen during an IceCube workshop in Atlanta in May to discuss the history and challenges of the observatory and the implications of the new discovery.

The godfather of IceCube

When I met Halzen, another scientist was introducing the neutrino researcher to a colleague as "the godfather of IceCube."

Space.com: So how did you become the godfather of IceCube?

Francis Halzen: Well, I started this thing. I think the idea is exactly 30 years old. Before that, I was a theoretical physicist, so I had to switch gears [to experimental physics]. I must say, I finally found what I wanted to do with life, so it was good.

Space.com: You developed this idea from the theory?

Halzen: The idea of building a detector like this was proposed in 1960 by a Russian physicist named [Moisei] Markov. Since that time, people have been trying to develop an idea to build detectors like this. The idea was to put these light sensors in water — in fact, that was Markov's idea.

There is one detector, a small one in the Mediterranean that's called ANTARES. It sinks light sensors, pretty much the same as ours, deep in the water. They are now building a bigger detector like us. But they are a decade behind.

I was a theorist, and I was working on detecting neutrinos and ice using radio antennas. I was thinking about ice and doing a theoretical program involving detecting neutrinos in ice. The experiment that was trying to do this at the time was failing. [That experiment was called DUMAND, the Deep Underwater Muon and Neutrino Detection project.] So, I thought, why not do this in ice?

Then, we discovered that the National Science Foundation [NSF] had a research station at the [South] Pole, where you have 3 kilometers [1.9 miles] of ice. Then we had to convince ourselves that melting photo multipliers into ice is easier than putting them into water.

Space.com: They just kind of melt their way down?

Halzen: That's how we do it. We melt ice over 2.5 km [1.6 miles] deep. And once the ice is water, we put the light sensors in and let the water freeze and take data.

Space.com: How long does it take to melt that water?

Halzen: About two days. You have a 5-megawatt power plant and a jet of hot water under pressure and just let it sink down into the ice. Two days later, you have transformed ice into water over the size of the hole. Well, there's never a hole — there's just water and ice!

Ice is an insulator, [so] it never quite changes its heat. The water stays liquid for quite a while, giving you plenty of time to put the equipment in. Then, you let the ice refreeze after a few days, and you have light sensors sitting in clear ice instead of clear water.

Space.com: You had to convince people that this was easier to do than putting them in water?

Halzen: Yes, and it was! Water experiments have been trying to do this since the early 1970s. We started in the early '90s and built our first detector [the Antarctic Muon and Neutrino Detector Array (AMANDA)] in the first 10 years. So, now we are way ahead of the water experiments.

In fact, there is still no water experiment that really works reliably. I think, for that, we were kind of clever that we saw this as simple.

But if something [bad] happens to them, you cannot get your hands on them. It's like launching a satellite, except you launch it down, not over the mountain.

Then, too, we were naive.

Halzen: Naive in the sense that we thought this was easier than water. It was, so we were partly right. But we were very lucky. Nobody had any idea whether this [Antarctic] ice was really clear. That's where we hit the jackpot. It's not like we knew this. In fact, there was a lot of evidence that [the] ice may actually not have been clear enough, but that was all wrong.

We hit incredibly beautiful, transparent ice at 1.5 kilometers' [0.9 miles'] depth. To build a particle detector, you need this really transparent material. This ice is the most transparent solid we know. You cannot build anything in the lab that is more transparent than this. And it's because this is ultrapure snow from 50,000 years ago that has condensed into ice.

Space.com: I guess that answers my next question — why the South Pole?

Halzen: It's very simple: because the NSF had a station there. If we had to build a station to do the experiment, we couldn't have afforded it. IceCube is like a detector you would build in a high-energy physics lab, like CERN in Geneva or Fermilab in Chicago. We already had the infrastructure. We had the labs. We have bulldozers. At the time we were building IceCube, they were renovating the station. In fact, IceCube partly motivated the renovation of the station!

Space.com: So, if you were deliberately trying to find pure ice, that's where you would go?

Halzen: Yes. [But] it was nothing deliberate [for us]. We were going to get what we get. Nature was kind to us. But it could have been the other way around. We didn't know. The only thing that counts, which we didn't know about, is its purity. The same is true for water.

The particle detector in Japan [Super-Kamioka Neutrino Detection Experiment, or Super-K, located in a mine], they use water as their Cherenkov medium [the material that allows you to view Cherenkov radiation, the flash of blue light that occurs when a neutrino interacts with another particle]. They reach 80 m or so with these ultrapurification systems. [Here's Why IceCube's Neutrino Discovery Is a Big Deal]

People were measuring the transparency of bubble-free ice in the lab. [The best distance] they got was 8 m. There were many measurements. Fortunately, I didn't know that.

Halzen: In many ways. The glaciologists were just stunned when they saw our results. They didn't believe me.

The IceCube [team] isn't smarter than glaciologists. It's because we spent millions of dollars. And that's just what it takes. You can do these experiments in the lab and get the wrong answer your whole lifetime. It's just not to the scale of answering the question [about the purity of ice]. We spent more money on it to get the answer.

The other thing that's interesting is that IceCube is actually sitting on a glacier that separates the eastern and western Antarctica. We didn't know that when we started. At the top, this glacier moves 10 m [33 feet] per year. So, we didn't know whether the ice deforms, which would have been bad. And now we know the answer.

The glaciologists salivated when they realized we were going to insert an instrument a kilometer into a glacier. We have one string of six dispensers that actually tilts to see whether [the glacier] deforms with time. And the answer is no, as far as we know.

We measure the temperature, and it's clear the temperature at the bottom [of the string] is close to 32 degrees Fahrenheit [0 degrees Celsius, the temperature at which water freezes, which suggests liquid water is nearby]. The glacier is floating on water. The theory now is that we know there are lakes under the South Pole. We know these are fed by underground rivers. So, this glacier is moving on a hydraulic network and just floating.

But we didn't know that when we started 30 years ago. [People] would always ask if the bottom is stuck to the bed and the top was moving 10 m, [if] it's going to break your strings. That's not actually right. It wouldn't do anything to the detector. But now it's not relevant.

The future of IceCube

Space.com: Now you're going to be upgraded next year, with more detectors.

Halzen: It's because of the filtering of the light is so long. We built a small AMANDA experiment as a test case, a research and development project. Because the distance was so close, we never saw light propagate for more than 30 or 40 m [98 or 130 feet, due to AMANDA's detectors being built so close together]. We had a suspicion that the light traveled much farther than we could measure with AMANDA.

Now, we know that we can separate the strings not by 125 m [410 feet] but 250 m [820 feet]. If you take the same number of strings in the space at twice the distance, you get 10 times the volume. So, we're going to build a 10-times-bigger detector for the same price as the original one. That's the effect of this large absorption rate. Because [the ice] is clear, the light travels further, so you can put your light sensors farther away.

They still overlap. The design we [originally] made was very conservative, because if you space them too far and they don't overlap, you cannot calibrate your detector and you end up with nothing. This is a real risky game, and you cannot change it after you build it. There is no fine-tuning.

Continue reading more of our interview discussing the implications of IceCube's newest discovery.