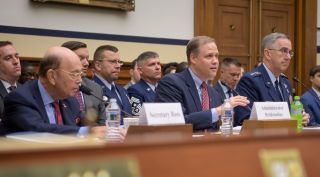 WASHINGTON — As the House prepares to take up a bill giving the Commerce Department new authorities for space traffic management, the leaders of NASA and U.S. Strategic Command offered their support for such a move.

"I believe transition is a good idea and I support the actions taken by the president on Monday to designate the Department of Commerce as the lead," said U.S. Air Force Gen. John Hyten, head of Strategic Command. "It's the right move and I commit to work with the administration, the Department of Commerce and the Congress to meet the president's space traffic management goals."[Presidential Visions for Space Exploration: From Ike to Trump]

In earlier studies of moving space traffic management responsibilities from the Department of Defense, the likely destination was the Department of Transportation, specifically the Federal Aviation Administration's Office of Commercial Space Transportation. While both Bridenstine, as a member of Congress, and Hyten had previously supported moving that work to the FAA, they said they were satisfied with the direction in SPD-3 giving Commerce that responsibility.

"A couple of years ago, when I drafted that bill, my thought was we'll put it at FAA, and we'll take everything and put it at FAA," Bridenstine said, referring to the American Space Renaissance Act that he drafted as a member of Congress in 2016. "It appears now that the right course of action, given the consensus that has been come to, is that it be at Commerce, and I fully support that. The key is, it needs to be done."

Bridenstine added that he was not involved in the negotiations on SPD-3 because he was still a member of Congress at the time it was developed. Vice President Mike Pence announced the draft space traffic management policy that became SPD-3 in a speech April 16, a week before Bridenstine was sworn in as NASA administrator.

Hyten offered a similar view, when asked about a pilot program that the Air Force had been in discussions with the FAA about regarding space traffic management. "From the STRATCOM perspective, from the DOD perspective, bluntly, it doesn't matter to me" which agency takes that responsibility, he said. "We need a civil agency that is doing that role."

Giving space traffic management work to a civil agency like Commerce will free up Defense Department resources, he argued. After the 2009 collision between an Iridium satellite and a defunct Russian satellite, he said STRATCOM assigned about 100 personnel from other tasks to handle space traffic management work. That number has declined somewhat since, but he said "dozens and dozens of airmen" are still working on that today.

Commerce Secretary Wilbur Ross, who also testified at the hearing, said transition planning was already in progress. That included, he said, soon sending "initial delegations out to Vandenberg, out to Omaha, to start learning more about the specifics that would be involved." Vandenberg Air Force Base in California is home to the Joint Space Operations Center that tracks objects in orbit, while U.S. Strategic Command is headquartered at Offutt Air Force Base near Omaha.

The goal, Ross, said, is for a "seamless transition" of space traffic management work. "It's hard to predict exactly what the timeline would be, but it's probably something more or less on the order of a year to make a seamless transition."

One member, though, sought to slow down that work. "We've not made a decision — this body, Congress — as to where space situational awareness should be housed," said Rep. Ami Bera (D-Calif.), ranking member of the space subcommittee. He argued that Congress needed to act to formally authorize such a move. "Secretary Ross, with all due respect, I don't want the Department of Commerce to start making those plans."

The House, though, will soon take up legislation to implement SPD-3. The House Science Committee announced, shortly after the hearing, plans for a markup session June 27 that will include the "American Space Situational Awareness and Framework for Entity Management Act," or "American Space SAFE Management Act."

That bill, according to a draft released by the committee, would implement elements of SPD-3, including requiring the Commerce Department to establish a civil space traffic management program within one year of the bill's enactment. The bill would give the department the authority to provide such services to civil and commercial operators, including those outside the U.S., without a fee.

The legislation includes a number of related provisions, including giving NASA responsibilities for doing research and development work regarding space traffic management, and providing NASA facilities and personnel to Commerce on a reimbursable basis to carry out space traffic management work. The bill doesn't mention, though, the use of Defense Department personnel and resources to carry out the work.

Bera noted at the hearing that he was not opposed to giving space traffic management work to Commerce, only that Congress needed to weigh in. "The DOD has done a wonderful job monitoring," he told Hyten. "It is time that we relieve you of some of that burden."