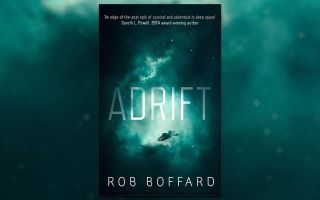 The title, shared by a different novel recently adapted into a film, led me to believe that "Adrift" would be just another entry in a long line of castaway stories. But my preconceptions soon faded as the book pulled me on board the Red Panda, the spaceship central to the storyline. Author Rob Boffard used the well-worn plot of a group of mostly strangers getting "stranded" and gave it an invigorated and fresh narrative energy.

"Adrift" opens by introducing Hannah Elliott, a recent college graduate with a history degree and no clear path. She's taken a dead-end job giving historical tours aboard shoddily maintained ships at a resort in a distant galaxy. Despite the intergalactic location, I'm sure many readers will find her situation all too relatable. This remote environment, which was once the site of an intergalactic war, is now home to flocks of tourists and exhausted employees like Hannah.

Things get off to a rough start as Hannah, on her first day as a guide, is late to a tour after forgetting her lens — a futuristic computer in the form of a contact lens that's reminiscent of a Google Glass and that just about everyone in the "Adrift" universe wears — which has the directions saved. She finally makes it to the Red Panda, where the bartender is absent and the guests are already in a bad mood, having had to wait for her to arrive. These grumpy, albeit unassuming, passengers will be guided by Hannah but flown by a war-hardened Russian pilot. But, as the book's title portends, what should have been a short, uneventful trip turns into a long journey the passengers never could have anticipated.

The passengers aboard the Red Panda are a varied bunch. They range from a young kid desperately vying for attention; to a cranky, hungover writer; to an elderly woman traveling alone. But although the book opens with Hannah just trying to do her best on her first day at a crummy job, the events that lead to the passengers' stranding shift every dynamic on board.

Every preconception you might have about a character is shattered at some point in "Adrift."

When the story begins, Hannah appears to be the main character. But as the events unravel, other characters take turns slipping into first person and leading the narrative. Perhaps Boffard's greatest accomplishment with "Adrift" is how seamlessly he allows the reader to transform instantaneously. The Red Panda sees everything from murder to redemption, and the ship's 10 diverse characters seem to become their true selves as they spend more days adrift.

"Adrift" mixes science fiction with certain elements of reality in a number of ways. In the book, people can jump through wormholes that are stretched and held open. And because wormholes remain theoretical, this element is deep in the realm of science fiction. But from the physical difficulties of wearing a spacesuit to the challenges of a spacewalk, the characters face many realistic obstacles as well.

Boffard does a fantastic job of keeping the reader in suspense, as the hope and possibility for rescue waxes and wanes with just about every page. The hardships and difficulties that the ragged band of space castaways face seem endless, and their predicament feels truly hopeless at many times throughout the book. But the ever-changing dynamics on board which constantly alter their journey and the courses they can take will have the reader realizing they've been holding their breath for pages on end.

"Adrift" did utilize a few tropes with its characters — the writer with depression and alcoholism; the vodka-swilling Russian war veteran; the uptight mother and her pushover husband. But even characters who seemed to fill these roles early on in the story evolved gracefully and surprisingly as the novel went on.

There was also a refreshing amount of casual diversity in the book. Jack, the writer, was in a same-sex relationship, but it did not define his character. Characters came from a variety of racial and demographic backgrounds, and the leadership roles were filled primarily by women.

I was almost disappointed by "Adrift" when I first cracked open the cover — an obvious title seemed to spoil all surprise I had hoped to find inside. But as I turned the last pages, I found myself desperate to know more. Did Hannah's newfound confidence as a leader allow her to follow her ambitions? Did Jack find happiness with his ex-partner? Was the group able to bring the perpetrators of their predicament to justice? The cliffhanger was both compelling and sweetly satisfying.