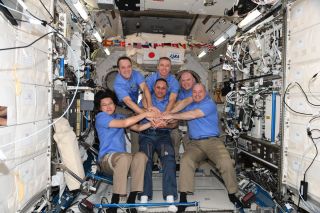 The six--person crew of the International Space Station's Expedition 55 poses for a group portrait on the orbiting laboratory. The astronauts will be working through the Memorial Day holiday on May 28, 2018.
(Image: © Scott Tingle/NASA)

This year for Memorial Day, the astronauts aboard the International Space Station are celebrating and remembering those who've served the same way they do every year — by working.

The space station crewmembers are simply too busy to take a holiday. Orbital ATK's Cygnus cargo ship, which launched on Monday (May 21), reached the space station early Thursday  (May 24) to deliver supplies that included equipment for scientific experiments. [What It's Like to Become an Astronaut: 10 Surprising Facts]

And while some of the experiments, like the Cold Atom Lab's "box of lasers," will be operated remotely, many of the other experiments will require fairly regular astronaut maintenance and work. Some of the experiments that flew up consist of "ICE Cube" modules that contain individual experiments, old-fashioned sextants that will be studied for space navigation, DNA- and RNA-sequencing technologies, and E. coli samples. Needless to say, the astronauts will have their hands full.

On top of the numerous experiments that astronauts need to set up, conduct and monitor every day on the space station, they have much more cargo to unpack, haul to its correct location and sort. Room is precious aboard the station, so this is a time-consuming and important process. Luckily, "There's always goodies on board," Kirk Shireman, NASA's space station program manager, said to reporters after Cygnus launched into orbit."We try to fly something that each crewmember likes. So, I'm sure there's something for them to look forward to."

But just because they're busy, that doesn't mean that the crew is not remembering or honoring those who've served in the U.S. armed forces. In fact, many current and former astronauts have been members of the U.S. military. Tingle, for example, is a former Naval officer. In years past, NASA spokesperson Kelly Humphries told Space.com, "Some crew members have been remembering our troops every Friday by wearing red shirts."

Luckily, NASA still understands the importance of a day off. While the crew will "actually have a full workday on Monday," Huot told Space.com, they "will get a day off in return at some future date to make up for missing the holiday."

Unfortunately, Huot said he does not believe that the crew has gotten a copy of "Solo: A Star Wars Story," which would have been perfect for their day off.