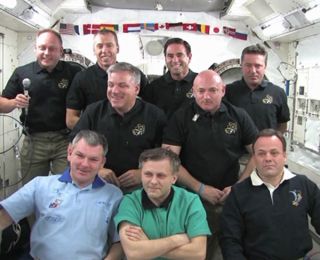 The STS-134 of Endeavour and station's Expedition 27 crews participate in the joint crew news conference aboard the International Space Station on May 26, 2011
(Image: © NASA TV)

HOUSTON – This Memorial Day weekend, while many Americans roll our their barbecues and soak up some sun at the beach, nine astronauts orbiting above Earth in the International Space Station will be spending their holiday weekend hard at work.

The massive orbiting laboratory is currently home to three station astronauts – Ron Garan of NASA and Russian cosmonauts Alexander Samokutyaev and Andrey Borisenko – and six visiting astronauts who are carrying out the final mission of the space shuttle Endeavour.

According to lead space station flight director Derek Hassmann, the shuttle and station crews do not have anything special planned for the Memorial Day weekend. But, even if they don't have time over the weekend, there will be other opportunities to celebrate the occasion. [Last Chance to See Space Shuttle Endeavour in Night Sky]

"Nobody has voiced any special plans," NASA spokesman Kelly Humphries told SPACE.com. "There's an Endeavour Tribute event at 12:56 a.m. CST Tuesday, and it wouldn't be out of line to expect something patriotic then if they missed the opportunity Monday."

As for the ground teams here at Mission Control in Houston, the flight controllers have no big plans either, "other than showing up for work," Hassmann told SPACE.com.

However those with slightly less busy schedules can catch a special view in the night sky this weekend. Between Sunday and Tuesday (May 29 and 31), the planets Jupiter, Venus, Mars and Mercury will converge in the sky along with the moon, offering a heavenly spectacle. [Four Planets Align Near Moon on Memorial Day Weekend]

The shuttle crew is entering the homestretch of a 16-day mission to deliver a $2 billion astrophysics experiment and other supplies to the space station. But even as the flight winds down, there is still work to be done before the astronauts make their journey back to Earth.

Earlier today (May 27), Fincke and Chamitoff completed the mission's fourth and final spacewalk. The outing, which lasted 7 hours and 24 minutes, was also the last ever spacewalk conducted by shuttle astronauts.

This holiday weekend, the astronauts will continue to unpack all the cargo for the station that was brought up on the shuttle. Endeavour hauled a load of hardware and spare parts to the orbiting laboratory in an attempt to leave it in a good position following the end of NASA's space shuttle program this year. Only one final shuttle flight remains after Endeavour's mission – the STS-135 mission of the shuttle Atlantis in July.

Early Sunday morning (May 29), Endeavour's crew will make final preparations for their departure from the space station. A farewell ceremony will take place at 6:56 a.m. EDT (1056 GMT) before the hatches between the station and the orbiter are sealed.

Endeavour is scheduled to undock from the space station on Sunday at 11:53 p.m. EDT (0353 May 30 GMT). The STS-134 mission is the 25th and final flight of Endeavour before the shuttle is retired along with the rest of NASA's orbiter fleet later this year.