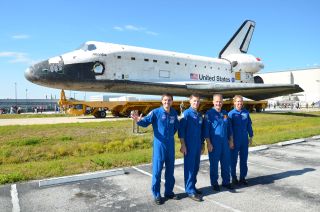 The shuttle Atlantis is slated to carry four veteran astronauts to the International Space Station to deliver supplies and spare parts for the orbiting outpost. NASA is targeting to launch Atlantis from the Kennedy Space Center in Florida on July 8 at around 11:40 a.m. EDT (1540 GMT).

The target launch date for Atlantis' 12-day mission is based on NASA's current planning. An official launch date will be announced following the mission's Flight Readiness Review on June 28.

During the final shuttle flight, Atlantis will also deliver an experiment "to demonstrate and test the tools, technologies and techniques needed to robotically refuel satellites in space – even satellites not designed to be serviced," NASA officials said in an announcement. [The Most Memorable Space Shuttle Missions]

The four-astronaut crew will return an ammonia pump that failed on the space station in July 2010. Engineers want to understand why the pump failed and hope to use the knowledge to improve designs for future spacecraft.

STS-135 will be Atlantis' 33rd and final mission before it is retired, along with the rest of the agency's orbiter fleet. The historic flight will be the 135th and final mission of NASA's space shuttle program.

Chris Ferguson, a veteran of two previous shuttle missions, will command the flight with Doug Hurley as the pilot. Astronauts Sandy Magnus and Rex Walheim will be the flight's mission specialists. No spacewalks are planned. [Spaceships of the World: 50 Years of Human Spaceflight]

In the weeks leading up to the launch, NASA will conduct several non-standard activities, including tests and close inspections of Atlantis' external fuel tank. Mission managers want to X-ray aluminum support beams, known as stringers, located near the mid-section of the fuel tank.

Cracks were detected in some the metal ribs on the shuttle Discovery's fuel tank after the orbiter's during the first launch attempt in November. Repairs forced a lengthy delay for that flight, which ultimately launched earlier this year. [Photos: Shuttle Discovery Sets Sail on Final Voyage]

An X-ray inspection of the similar metal ribs on Atlantis' fuel tank  will provide extra confidence that there are no cracks, NASA officials said. Some of the ribs were already modified with extra material to add strength and do not require inspection, they added.

Atlantis' STS-135 mission will mark the 135th and final flight for NASA's space shuttle program after 30 years of spaceflight. The space shuttles are retiring in order to make way for a new space exploration program aimed at sending astronauts on deep space missions to visit an asteroid by 2025, and then aim for Mars.

After Atlantis' final flight, the shuttle will be sent to the Kennedy Space Center Visitor's Complex for public display. NASA's two other space flown shuttles, Endeavour and Discovery, will also be sent to museums.

The shuttle Endeavour is currently flying its final mission, called STS-134, and is docked at the International Space Station.

Endeavour and its crew launched Monday (May 16) to deliver a major astrophysics experiment and perform maintenance on the space station during four spacewalks. Endeavour is due to return to Earth on June 1.