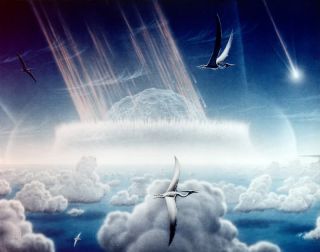 An artist's rendering from 1994, illustrating the Chicxulub asteroid impact that killed off most of the dinosaurs about 66 million years ago.
(Image: © Donald E. Davis/NASA/JPL)

Carbon dioxide released into the atmosphere after the impact of the Chicxulub asteroid, which ended the era of dinosaurs some 65 million years ago, warmed the Earth's climate for 100,000 years, a new study has revealed.

The study, based on an analysis of fossil records, suggested that the Earth's overall temperature increased by 5 degrees Celsius (9 degrees Fahrenheit) over that time.

The results raise concerns about how long it will take for the planet to recover from the effects of human-caused greenhouse gas emissions, said Kenneth MacLeod, a professor of geological sciences at the University of Missouri and lead author of the new work, published today (May 24) in the journal Science. [How the Dino-Killing Chicxulub Asteroid Impact Was Found]

Scientists have long theorized that after the piece of space rock with a diameter of 6 to 9 miles (7 to 14 kilometers) smashed into the Yucatan Peninsula near today's town of Chicxulub in Mexico, the temperature of the planet first rose sharply for minutes or hours, MacLeod said. After that, it plunged down for months to decades, because the huge amount of dust and soot thrown into the atmosphere by the impact blocked the sun's rays. Eventually, however, carbon dioxide released during the impact led to global warming.

MacLeod's study is the first to present empirical evidence of how long this greenhouse gas-related global warming lasted and how substantial it was.

"We thought that we could resolve this question by looking at fossilized bits of fish teeth, scales and bones from the El Kef section in Tunisia," MacLeod told Space.com, referring to a paleontological site in northwestern Tunisia known for having one of the world's best-preserved fossil records from the period before and after the Chicxulub impact

"This place is known for having a beautiful record across the interval that we are looking at — the so called Cretaceous-Paleogene boundary — the mass extinction event following the Chicxulub impact."

The researchers looked at the concentrations of different oxygen isotopes in the fossils. These isotopes differ in the number of neutrons in the oxygen atom and, according to MacLeod, behave slightly differently from one another.

"One of the differences is, as temperature increases, the amount of the light oxygen isotope, oxygen 16, in a mineral increases relatively," MacLeod said.

"We found that there was a really big difference in oxygen isotopes between these three sets of samples — unambiguous," said MacLeod.

He said he and his team now want to look at fossil samples from other parts of the world and check for similar patterns.

The study, MacLeod said, not only sheds more light on what happened to the Earth's systems after the devastating collision, but it also raises questions about the consequences of current human activities.

"If I were to draw a line under the lessons of this study for the modern era, it would be to contemplate the idea that what we are doing in our lifetimes will affect the Earth for the next 100,000 years, which is pretty daunting," MacLeod said.