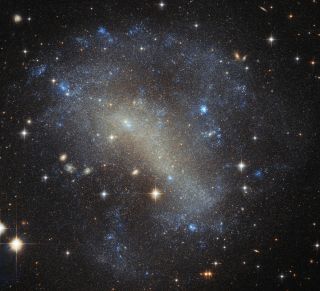 Millions of light-years from Earth, the dwarf irregular galaxy IC 4710 twinkles in all its disorderly beauty.
(Image: © Judy Schmidt/NASA/ESA)

In the far reaches of the constellation Pavo, the peacock, the dwarf irregular galaxy IC 4710 glitters brilliantly with colorful stars. This shapeless blob of a galaxy is home to many clusters of bright, blue newborn stars, which form in pockets around the outskirts of its cloudy, yellow-white core.

Discovered in 1900 by astronomer DeLisle Stewart of Harvard College Observatory, this small galaxy lies 25 million light-years from Earth. The Hubble Space Telescope captured this view of the galaxy using its Advanced Camera for Surveys.

Dwarf irregular galaxies like IC 1470 have a "chaotic appearance, lacking central bulges and spiral arms," officials from the European Space Agency (ESA), which released the photo Feb. 26, said in a statement. "They are distinctly different from spirals or ellipticals." [Infographic: How Galaxies are Classified by Type]

Experts think this strange, deformed galaxy may have once been a more typical galaxy that morphed due to interactions with other galaxies, ESA officials said. Scientists also suspect that these unique figures, which may make up as much as a quarter of all known galaxies, may resemble the first galaxies in the universe.

The Pavo constellation also contains several other notable elements: NGC 6752, the third-brightest globular cluster in the night sky; NGC 6744, a spiral galaxy and Milky Way look-alike; and six star systems that are known to host exoplanets. One of these systems, HD 181433, hosts a super-Earth.