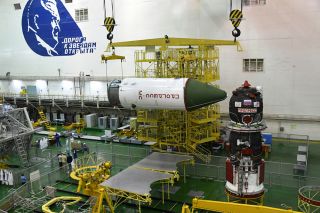 Russia's Roscosmos space agency will launch the Progress 70 cargo ship on the fastest flight yet to the International Space Station from Baikonur Cosmodrome, Kazakhstan on July 9, 2018. Here, Progress 70 is prepared for flight.
(Image: © RSC Energia)

Update: Roscosmos successfully launched the Progress 70 cargo ship on the fastest trip yet to the International Space Station. Less than 4 hours after launch the spacecraft docked at the orbiting lab, a first.

Russia's space agency Roscosmos will launch a fresh cargo ship on a swift flight to the International Space Station today (July 9) and you can watch it live online. The mission will set a new speed record for space station trips: It's supposed to take less than 4 hours, NASA says.

A Soyuz rocket is scheduled to launch the uncrewed Progress 70 spacecraft from the Baikonur Cosmodrome in Kazakhstan at 5:51 p.m. EDT (2151 GMT) to deliver nearly 3 tons of supplies for the space station's crew. NASA's launch webcast will begin at 5:30 p.m. EDT (2130 GMT) and you can watch it live here, courtesy of NASA TV.

If all goes well, the robotic Progress 70 spacecraft will dock itself at a Russian port on the station at 9:39 p.m. EDT (0139 July 10 GMT). That would be the fastest trip yet for a mission to the space station. Progress spacecraft (and crew-carrying Soyuz capsules) originally took two days to reach the station before Roscosmos cut that trip down to 6 hours in 2013. Progress 70 should make the trip in just over 3.5 hours. [Russia's Progress Cargo Ships Explained (Infographic)]

"The less-than-four-hour trip will demonstrate an expedited capability that may be used on future Russian cargo and crew launches," NASA officials said in a statement."

The Progress 70 launch is Russia's third attempt to fly a superfast mission to the space station. The first attempt occurred in October 2017 using the Progress 68 spacecraft, but a last-minute delay forced Roscosmos to shift to the older, 2-day flight profile due to the orbital mechanics needed for the faster trip.

A second attempt earlier this year in February hit the same roadblock with Progress 69: A last-minute glitch forced Roscosmos to abort the launch a minute before liftoff. Ultimately, Progress 69 launched on the 2-day flight profile as well.

Russia's Progress cargo ships have been keeping the space station stocked with supplies since 2000, when the first crew took up residence on the orbiting lab. The vehicles look like Russia's crewed, three-module Soyuz spacecraft but cannot carry people.

Progress spacecraft are disposable vehicles that are packed with trash and unneeded items and intentionally burned up in Earth's atmosphere at mission's end. Progress 70 will stay linked to the space station until January 2019, when it will be discarded, NASA officials said.

Russia's Progress vehicles are not the only robotic cargo ships to keep the space station stocked with supplies. Private cargo ships like SpaceX's Dragon vehicles and the Cygnus spacecraft built by Northrop Grumman Innovation Systems ferry supplies to the station for NASA. The Japan Aerospace Exploration Agency sends its own H-2 Transfer Vehicles on delivery missions. The European Space Agency launched five of its massive Automated Transfer Vehicles to the station between 2008 and 2014.