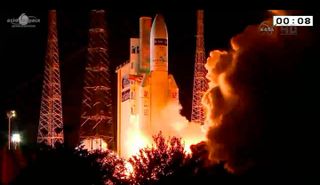 A European space cargo ship as large as a double-decker bus blasted off for the International Space Station on Tuesday, marking the final space voyage for the huge robotic spacecraft.

The European Space Agency's fifth Automated Transfer Vehicle launched into orbit atop an Ariane 5 rocket from French Guiana Tuesday evening (July 29) at 7:47 p.m. EDT (2347 GMT; 8:47 p.m. local time), kicking off the final mission for this line of unmanned spacecraft, which has been resupplying the space station since 2008.

ATV-5 will take its time getting to the orbiting lab, finally arriving on Aug. 12 with more than 7 tons of food, water, clothing, spare parts and scientific gear. The cargo vessel itself weighs 13 tons; the fully loaded ATV-5 is the heaviest payload ever lofted by an Ariane 5, European Space Agency (ESA) officials have said. [Europe's ATV-5 Space Cargo Ship Mission in Pictures]

ESA names each of its ATV vehicles after European scientists and thinkers. ATV-5 received the moniker "Georges Lemaitre," after the Belgian priest and astronomer considered the progenitor of the Big Bang theory of the universe's origin.

In keeping with its name, Georges Lemaitre is hauling some interesting scientific experiments to the International Space Station. One of them is ESA's Haptics-1 study, which will install a high-tech joystick on the station that astronauts will use to play simple video games.

ATV-5 also carries ESA's "electromagnetic levitator," which will heat up metals and cool them quickly, revealing key insights about how atoms arrange and rearrange themselves during the process of melting and solidifying. (It's tough to study the basic physics involved here on Earth, since gravity plays a large and complicating role, ESA officials said.)

Several new rendezvous and docking sensors are also aboard Georges Lemaitre. The vehicle will test some of them during a close flyby of the space station on Aug. 8, while others will get a workout during ATV-5's final approach four days later, NASA officials said.

Even Georges Lemaitre's fiery death in Earth's atmosphere — which will likely come about six months after docking — should return some useful data. Infrared imagers aboard the cargo vessel will collect data during ATV-5's re-entry, helping engineers plan for the eventual de-orbit of the $100 billion space station. (NASA hopes to keep the orbiting complex operational through at least 2024.)

SpaceX holds a $1.6 billion deal with NASA to make 12 supply runs to the station with Dragon and has already completed three of those missions. Orbital Sciences, meanwhile, has flown one of eight expected cargo flights under a $1.9 billion NASA contract.