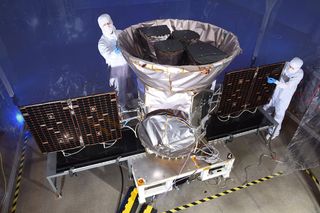 NASA's Transiting Exoplanet Survey Satellite (TESS) is scheduled to lift off atop a Falcon 9 rocket on April 16, 2018.
(Image: © NASA/Orbital ATK)

Update: NASA and SpaceX have delayed the launch of TESS to no earlier than Wednesday (April 18) due to an issue with the Falcon 9 rocket.

The Transiting Exoplanet Survey Satellite (TESS) is ready to go, as is its SpaceX Falcon 9 rocket ride, mission officials said during a pre-launch briefing today (April 15).

"We just got done with our launch readiness review, and all went well," said Omar Baez, senior launch director for the Launch Services Program at NASA's Kennedy Space Center (KSC) here. The launch will take place from Cape Canaveral Air Force Station, which is next-door to KSC. [NASA's TESS Exoplanet-Hunting Mission in Pictures]

And the weather is likely to cooperate as well. Some storms will blow through the area tonight, but they'll likely be gone by the scheduled launch time of 6:32 p.m. EDT (2232 GMT) tomorrow, said weather officer Mike McAleenan, of the U.S. Air Force's 45th Weather Squadron. There's just a 20 percent chance that Mother Nature will scuttle that liftoff, he added. The chief concern for tomorrow is strong winds.

The launch window tomorrow lasts just 30 seconds. If winds do rear up and spoil things, the outlook is even better for the backup day, Tuesday (April 17). There's less than a 10 percent chance of bad weather on Tuesday, McAleenan said.

TESS is designed to spot exoplanets by noticing the tiny brightness dips caused when they cross the face of, or transit, their host stars. This same method is employed by NASA's Kepler space telescope, which has found about two-thirds of the 3,700 exoplanets known to date.

If all goes according to plan, TESS will settle into a long, looping orbit around Earth in June, then beginning hunting for worlds that circle stars relatively close to the sun. TESS could end up discovering thousands of such planets, mission officials have said.

But TESS isn't about merely boosting the exoplanet tally. The goal is to find alien worlds that can be investigated in depth by future instruments, such as NASA's $8.8 billion James Webb Space Telescope, which is scheduled to lift off in 2020.

Tomorrow's liftoff, which you can watch live here on Space.com, will be action-packed for SpaceX. Shortly after launch, the company will attempt to land the first stage of the two-stage Falcon 9 on a robotic "drone ship" stationed in the Atlantic Ocean. SpaceX has already pulled off two dozen such first-stage landings, roughly half of them on drone ships.

The company will also try to recover the payload fairing, the protective nose cone surrounding TESS during launch. But SpaceX won't use the net-equipped boat "Mr. Steven" to snatch the fairing halves out the sky tomorrow, Hans Koenigsmann, SpaceX vice president of build and flight reliability, said during today's briefing. Rather, the fairing halves will splash down in the ocean with the aid of parachutes, and the company will scoop them out of the water.

Such activities are part of SpaceX's effort to develop fully and rapidly reusable rockets and spacecraft, a breakthrough that company founder and CEO Elon Musk has said could slash the cost of spaceflight and help humanity spread its footprint out into the solar system.