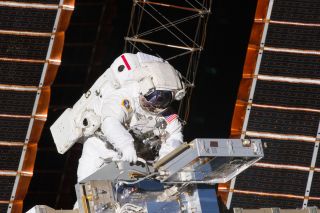 NASA astronaut Drew Feustel takes a spacewalk during mission STS-134 on May 20, 2011. He will take the seventh spacewalk of his career on March 28, 2018, together with NASA astronaut Ricky Arnold.
(Image: © NASA)

Two NASA astronauts are taking a spacewalk outside the International Space Station (ISS) today (March 29), and you can watch their 6.5-hour excursion live online.

Expedition 55 flight engineers Andrew Feustel and Ricky Arnold will exit the station through the Quest Airlock at approximately 8:10 a.m. EDT (1210 GMT). NASA will provide live coverage starting at 6:30 a.m. EDT (1030 GMT), when the astronauts are putting on their spacesuits and getting ready for the day. You can watch it live here and on the Space.com homepage, courtesy of NASA TV.

The spacewalkers will install new handrails with built-in wireless communications equipment, replace a malfunctioning camera and remove a set of old hoses from the space station's cooling system, NASA officials said at a news conference Tuesday (March 27). Those aging hoses appear to be responsible for an ammonia leak that NASA has been investigating for over a year now, ISS program manager Kenneth Todd said during the briefing. [Space Station Photos: Expedition 55 Crew in Orbit]

"We made the decision last year to isolate [the leak] at one of the radiators, thinking we might have come up with the potential leak scenario for where the ammonia was being liberated, and it looks like there's a set of flex hose jumpers that we have it narrowed down to," Todd said. The spacewalkers will bring the offending hose jumpers inside the station, where they will ultimately get packed into a cargo spacecraft and be sent back to Earth for further analysis.

Today's spacewalk comes just six days after the astronauts arrived at the ISS. Along with their Russian crewmate Oleg Artemyev, Feustel and Arnold launched to the station on March 21 and docked their Soyuz MS-08 spacecraft to the Poisk module two days later.

"No worries about them getting used to their space legs — they're both experienced space travelers and spacewalkers," NASA spokesman Gary Jordan said at the briefing.

This will be Feustel's seventh spacewalk following three spacewalks he did during shuttle mission STS-125 in 2009 and three for STS-134 in 2011. Arnold will tackle his third spacewalk today, having completed two during STS-119 in 2009.

Today's spacewalk also marks the 100th spacewalk completed by Expedition crewmembers, or long-term residents of the ISS, and the 209th overall in support of space station assembly and maintenance.