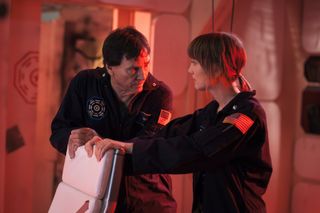 "Battlestar Galactica" alumnus Richard Hatch stars in a new science-fiction web series, "Personal Space," that will air on Amazon Video March 2. Hatch's performance in the new series is one of his last, as Hatch died in February 2017 of pancreatic cancer.

The new, 28-episode series features a crew on a starship called Overture, which began its journey to a distant star in the 1990s. (The show's producers explain that in the show, American space progress happened much more quickly than in real life.)

Now, in the year 2017, crewmembers on the ship individually tell their troubles to the ship's therapy computer. They think that their sessions are kept confidential, but the computer actually replays the sessions for other crewmembers — and for an avid audience back on Earth.

"I'm just thinking that it may be necessary for me to step in to help her keep everyone on her side," says Hatch to the computer in a YouTube series trailer. He is speaking of a fellow crewmember on his ship, Gail, played by "Battlestar" (2004) alumnus Nicki Clyne. "Some said that Gail was only on this mission because of who her parents are, what they did. People talk."

The scene cuts to Clyne listening to Hatch's description, in disbelief. "My parents?" she says.

According to a statement, other stars in the series include Kurt Yaeger of "Sons of Anarchy," Cliff Simon of "Stargate SG-1," Tim Russ of "Star Trek: Voyager," Brent Bailey of "Emma Approved" and Sean Persaud of "Edgar Allen Poe's Murder Mystery Dinner Party." (Mark Tierno, who starred in "The Mercury Men," makes an appearance as noted German rocket developer Wernher von Braun.)

Series co-creators Tom R. Pike, Zack Wallnau and Dana Luery are best known for creating the web series "Echo Chamber." Joining them is producer Jeff Hammer. In May 2016, Personal Space raised $49,000 on Kickstarter from 703 backers. Shooting wrapped up in September that year, just months before Hatch passed away.

"Actors don't have to work that hard. Especially not famous ones, who have earned some time off," Pike wrote on Kickstarter shortly after Hatch's death. "They just have to show up and do their lines. But Richard was more than that — he was a partner, instrumental in getting the show funded and reaching our fans. I don't think we would be making it without him."

Hatch is best remembered for participating in both the 1978-79 and 2004-09 versions of "Battlestar Galactica." Both series featured humans in a battle for survival against a human-created robot army called the Cylons. Hatch played Captain Apollo in the earlier series, and the resistance fighter Tom Zarek in the reimagined 2004 series.

"It [Star Trek] was always about finding solutions, and it just was one of those things, I think," he told Space.com in 2014. "I don't know how anybody can look to the sky and not wonder what's out there, and here you have a show where no man or woman, literally, has gone before."