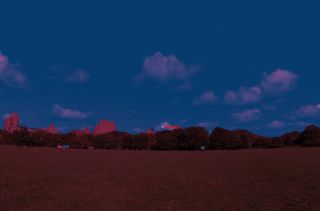 Venus will become an evening fixture in the western sky in the coming months. Here, it shines above New York City at 6 p.m. local time on Feb. 26.
(Image: © Starry Night software)

It's back! After a winter sabbatical of sorts, hiding out of sight since the beginning of December, Venus — by far the most brilliant of the naked-eye planets — is back in view. After spending much of 2017 as a morning object, Venus is about to settle in as a prominent "evening star" for the next eight months, becoming a fixture of the western sky.

Our nearest planetary neighbor travels in a nearly perfect circle, orbiting the sun 13 times in eight Earth years, so that, as seen from Earth, it appears to make five circuits around the sky. Each of the eight years in this Venus cycle (known and important to ancient civilizations such as the Maya and Babylonians) has its own particular pattern, so 2018 repeats (within about two or three days of the same date) the phenomena of 2010.

Venus passed superior conjunction, appearing to go behind the sun as seen from Earth, back on Jan. 9. Until recently, it has been invisible, mired deep in the brilliant glare of the sun. Nonetheless, with each passing day, it has been moving on a slow course toward the east and pulling slowly away from the sun's general vicinity. [When, Where and How to See the Planets in the 2018 Night Sky]

On Feb. 5, Larry Gerstman, a member of the Amateur Observers' Society of New York, spotted Venus from Long Beach, New York. He wrote:

"I decided to watch the sunset and then hunt for Venus with my 12x40 handheld binoculars with Venus' being less than 5 degrees above the horizon. After watching the last bead of sunset I immediately aimed my binoculars, with a 5.5 degree field of view, up and slightly to the left and there was Venus, easy to see in the binoculars just seconds after sunset at 5:18 PM. I could not see Venus [with my] naked eye, but five minutes later it became even more obvious in the binoculars and I followed it to within a half a degree above the horizon at 5:44 PM."

During this upcoming week, Venus should become more evident even without optical aid, very low in the western twilight. On the evening of Saturday, Feb. 24, it sets 8 degrees south of due west about 50 minutes after sunset, and by March 1, this will have improved slightly to an hour after sunset, giving less-experienced skywatchers an excellent chance to get their first glimpse of it.

Keeping company with Mercury (and Uranus)

As a bonus for Venus watchers, for the first three weeks of March, the planet will be within 5 degrees of another bright world: the so-called "elusive planet," Mercury. On the evening of March 4, the two planets are separated by just 1.1 degrees. Mercury shines at magnitude -1.2, making it nearly as brilliant as the brightest star in the sky, Sirius. Yet, this is only one-twelfth as bright as dazzling Venus, which will glow at magnitude -3.9. (Smaller magnitudes denote brighter objects.) Mercury will then be situated to the upper right of Venus. Search for them low above the western horizon a half-hour after sunset. While both will be evident to the naked eye, binoculars will certainly enhance their visibility against the bright twilight.

Continuing to swing east of the sun during March, Venus will soon become plainly visible in the western evening sky even to the most casual of observers. The planet will appear as a brilliant, white "star" shining with a steady glow, and it will set 80 minutes after the sun by St. Patrick's Day.

On March 28, you can use Venus as a "pointer" to locate the planet Uranus. On that evening, Venus passes only 4 minutes of arc (0.066 degree) south of Uranus. Venus will be resplendent at magnitude -3.9 compared to sixth magnitude Uranus; this close approach will serve as a convenient opportunity for identifying Uranus in a small telescope or binoculars without the need to consult a sky map. Wait until about an hour after sundown to look for them, but be aware that by that time, the planetary duo will be very low — only about 6 degrees above the western horizon.

With each passing week, Venus rises higher each evening to adorn the western evening sky during the upcoming spring and summer. [Learn to View the Night Sky with 'See It with a Small Telescope']

A slow rise to prominence, then a rapid exit

By the beginning of June, Venus will stand nearly 30 degrees above the sunset horizon and set as late as 2 hours and 40 minutes after the sun. Interestingly, the planet's greatest altitude at sunset will also be occurring at this time, when the ecliptic (the apparent path of the sun, moon and planets throughout the year) becomes nearly vertical with respect to the western horizon for observers in northern latitudes.

On July 9, Venus passes 1 degree to the north of bluish Regulus, the brightest star in the constellation Leo, the lion. Six days later, on July 15, Venus and a slender (12-percent illuminated) crescent moon will make for an eye-catching sight in the western sky.

Venus reaches its greatest elongation — its greatest angular distance from the sun — 46 degrees to the east of the sun — on Aug. 17, though it will actually appear about 10 degrees lower compared with where it was during late spring. It is brightest at the very end of summer as it heads back down toward the sun, reaching its greatest illuminated extent (greatest brilliancy) for this apparition on the evening of Sept. 21, at an eye-popping magnitude of -4.8. By then, however, it will be only 10 degrees high at sunset and will be setting just over an hour after the sun does.

Venus then drops rapidly back toward the sun, vanishing from view within the first few days of October, and passes inferior conjunction on Oct. 26.

Between now and October, repeated observation of Venus with a small telescope will show its complete range of phases and disk sizes. Currently, the planet will appear practically full (98-percent sunlit), as a tiny, dazzling gibbous disk. It will start becoming noticeably less gibbous by July 20. In mid-August, Venus reaches dichotomy (displaying a "half-moon" shape). Then, for the rest of the year, it will appear as a large crescent as it swings near to Earth. Indeed, skywatchers using telescopes will note that, while the Earth-Venus distance is lessening, the apparent size of Venus' disk will be growing, doubling from its present size by July 29. When it has doubled again in size on Sept. 21, its large crescent shape should be easily discernable even in steadily held seven-power binoculars. During the last week of September, as Venus rapidly sinks lower each night, it will appear as a relatively large and slender crescent. It will disappear from the evening sky within the first few days of October.

In November, Venus sprouts up into the predawn eastern sky, to reach an even greater maximum height in the morning skies of December. And Christmas 2018 will see Venus mimicking a modern-day Star of Bethlehem, appearing as a glorious "star in the east" before sunrise.