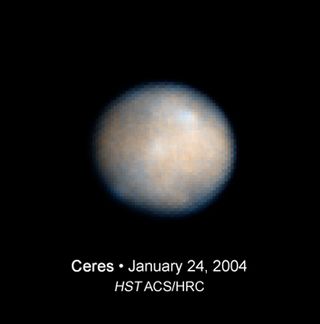 The Hubble Space Telescope has imaged two of the largest known asteroids, revealing craters and other features that will soon be the targets of close-up observations by NASA's Dawn spacecraft.

Ceres is round, like a planet, and 590 miles (950 kilometers) wide. The rock, about the size of Texas, contains some 30 to 40 percent of all the mass in the asteroid belt between Mars and Jupiter.

Thought to be a planet after its discovery in 1801, Ceres was later reclassified as an asteroid. But under the new and controversial planet definition that demoted Pluto, Ceres is now considered a dwarf planet.

Vesta, the other target, is irregularly shaped and about 330 miles (530 kilometers) wide—about the size of Arizona.

On July 7, NASA plans to launch Dawn—a mission that had been cancelled but was reinstated last year—on a four-year journey to the asteroid belt. The robotic probe will go into orbit around Vesta in 2011 and Ceres in 2015. The new images will help astronomers fine tune mission plans.

The picture of Vesta allowed astronomers to map the asteroid's southern hemisphere. A crater there, caused by an ancient collision, is a whopping 285 miles (456 kilometers) across. Researchers have known that the collision spawned many smaller asteroids that they call vestoids.

Color differences in the image reflect differences in surface chemicals, some of it possibly due to volcanic activity, that Dawn will explore for clues to the asteroid's interior structure. The effects might be similar to dark "seas" and bright highlands on Earth's moon, astronomers said in a prepared statement.

The picture of Ceres reveals bright and dark regions that could be topographic features such as craters, researchers said. Or they could just show areas of different surface material.

Ceres' round shape suggests its interior is layered, like Earth's is, astronomers said. It might have a rocky core, an icy mantle and a thin dusty crust. There could be water inside, too.