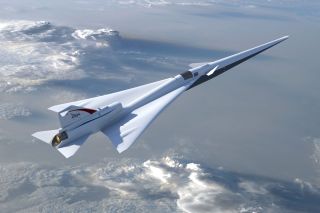 The Trump administration's fiscal year 2019 budget proposal for NASA includes full funding for an experimental supersonic airplane that could one day transport commercial-airline passengers faster than the speed of sound.

Known as the Low-Boom Flight Demonstrator (LBFD), this X-plane is scheduled to make its first test flight as early as 2021 and "would open a new market for U.S. companies to build faster commercial airliners, creating jobs and cutting cross-country flight times in half," the White House budget request states.

The goal of supersonic aircraft like LBFD is to make commercial airplanes that can fly faster than the speed of sound without generating a loud and obnoxious sonic boom, an ear-splitting noise associated with shock waves generated by an aircraft as it breaks the sound barrier. [Images: Airplanes of Tomorrow, NASA's Vision of Future Air Travel]

While NASA has been breaking the sound barrier with its experimental aircraft since Chuck Yeager's famous flight of the Bell X-1 in 1946, the sonic-boom issue has been the main reason why supersonic passenger planes still aren't in use today. (The Concorde, a now-retired supersonic passenger jet built in the 1970s, would only fly over the ocean for that reason.) Another issue is the fuel efficiency, which is significantly reduced due to drag at supersonic speeds, NASA officials said in a statement.

"Future supersonic aircraft seeking to achieve a low-boom, such as NASA's LBFD, will rely on a swept wing design in order to fly at supersonic speeds without producing a loud sonic boom," NASA officials said. "The swept wing design generally produces crossflow, which is a name for air flow disturbances that runs along the span of the wing, resulting in turbulent flow, increased drag and ultimately higher fuel consumption."

The agency has already been testing preliminary designs of the LBFD X-plane. Last summer, a scale model known as the Quiet Supersonic Transport (QueSST) aircraft was put to the test in a supersonic wind tunnel at NASA's Glenn Research Center in Cleveland. With the financial support allotted by the 2019 budget request, the agency would be able to start building the full-scale LBFD with the goal of beginning flight tests in 2021.

The $633.9 million budget proposed for NASA's Aeronautics division in fiscal year 2019 is $21.6 million less than the division received in 2018, which amounts to a 3.3-percent decrease.

While NASA works on its new supersonic plane, commercial space companies are working on similar concepts. Virgin Galactic and Boom Technology are also collaborating to build a supersonic passenger jet that can travel at twice the speed of sound, or 1,451 mph (2,335 km/h), enabling flights from London to New York City in about 3 hours.

Another company, Spike Aerospace, is developing its S-512 Quiet Supersonic Jet, which could make the same trip in about the same time. With today's passenger airplanes, that trip typically takes 6 to 7 hours.