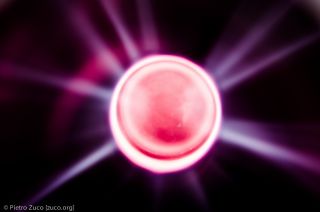 You would think that electrons would be easy enough to describe. Mass. Charge. Good to go. Those two little numbers can be used to describe a whole host of electromagnetic phenomena. But researchers have learned that those particles are much more complicated than that.

That became clear when Otto Stern and Walther Gerlach shot some silver atoms through a varied magnetic field in 1922 and saw something they couldn't explain. The setup required silver atoms that were electrically neutral — with their electrons' charge perfectly balancing that of the protons. If you were to run this experiment and not know anything about quantum mechanics (a la Stern and Gerlach), you might expect one of two results. [The 5 Most Ingenious Experiments in Astronomy and Physics]

In the most boring possible result, the neutrality of the atoms would nullify any interaction with the magnetic field, and they would straight-line sail through the apparatus without even blinking.

However, if the components of the atom were to behave like little metal balls that didn't merely have mass and charge, but could also spin on their own axis, then that angular momentum would indeed interact with the surrounding magnetic field, producing a torque. This is a totally normal and well-known electromagnetic effect that you can try at home, assuming you have strong magnetic fields and rapidly spinning metal balls.

Since each individual atom would have a random torque in a random direction, that interaction would spread out the trajectories of the atoms, sending them splattering against a screen after exiting the magnetic field.

Stern and Gerlach were surprised because they got neither.

Taking a fork in the road

Instead, the two German scientists found themselves staring at two distinct splotches of deposited silver atoms. Instead of going in a straight line, and instead of spreading out evenly, it appeared that the silver atoms had conspired to separate themselves into two distinct camps, with one group heading up and the other going down.

The experimenters were witnessing one of the first in-your-face clues that the subatomic realm operates on rules that are far from the familiar ones. In this case, quantum effects were in full force, and researchers soon realized that atoms (or more precisely, the particles that comprise atoms) have a previously unknown property that only reveals itself in the presence of a magnetic field.

And since those atoms kinda-sorta behaved as spinning balls of electrically charged metal, this new property was dubbed "spin." And so particles like electrons suddenly had three properties: mass, charge and spin.

Taking it out for a 'spin'

And just like mass and charge, we can perform experiments to discover the nature of the spin property and how it interacts with the other forces and particles in the universe. And it turns out that spin has some pretty weird properties indeed.

For example, a spin 1/2 particle like an electron can only ever be measured to be +1/2 or -1/2, corresponding to the up and down deflections of the Stern-Gerlach experiment. A spin 1 particle, such as a photon, can be measured to have directions +1, 0, or -1, and that's it. I know it’s confusing notation, but you’re going to have to blame the physicists who first describing it a hundred years ago.

Keep in mind that the actual direction of the spin could point anywhere — imagine a little arrow tagged onto each and every particle. The length of that arrow is fixed for each kind of particle, but we're only ever allowed to measure a limited number of directions. If the arrow is pointing even slightly up it will register in any experiment as +1/2. If it's a little bit down or very much down, it doesn’t matter, we get -1/2. And that's it.

It's like the most useless GPS navigation in the world: Instead of giving you accurate directions, you're only told, "Go north 500 steps," or "Go south 500 steps." Good luck finding that restaurant.

Taking it to the limit

That right there is the bedeviling nature of quantum mechanics: It fundamentally limits our ability to measure things at small scales.

After enough experimentation, the "rules" of spin were added to scientists' knowledge of quantum physics, concurrently being developed in the 1920s. But it wasn't exactly a natural fit. The formulation of the quantum world that most folks are familiar with — say, the famous Schrodinger wave equation the allows us to compute probabilities of particle locations — doesn't naturally include the concept of spin.

The trouble stems from the approach that Erwin Schrodinger took when he went to figure out all this quantum business. By the early 1920s, Einstein's theory of special relativity was already old news, and physicists knew that any law of physics must incorporate that. But when Schrodinger wrote a relativistically correct version of his equation, he couldn't make heads or tails of it, and abandoned it for the less-correct, but still workable, version that we know and love. While incredibly useful, Schrodinger’s picture of quantum mechanics doesn’t automatically include any description of spin — it has to be inelegantly tacked on.

But around the same time, a certain theoretical physicist named Paul Adrien Maurice Dirac was also puzzling out the quantum world and went full bore with an approach to quantum mechanics that included special relativity. And unlike his buddy Erwin, he was able to crack the mathematical code and figure out its implications. One of those implications of uniting quantum mechanics with special relativity was — you guessed it — spin. His mathematics automatically included a description of spin. If he had worked it out a few years before the experiments of Stern and Gerlach, he could’ve predicted their results!

Instead we discovered quantum spin through experimentation, but Dirac taught us that in order to understand this strange particle property we have to put ourselves in a fully relativistic, and quantum, state of mind. As tempting as it may be, we have to totally discard any thoughts of subatomic particles being tiny, little spinning metal balls; their behavior is much more complex than that metaphor might suggest. Indeed, there are probably no useful metaphors at all.

There is simply no classical description of this enigmatic property. Instead, spin is a fundamental property of our universe, manifested only in the intersection of quantum mechanics and special relativity, without macroscopic metaphors. It’s only through Dirac's mathematical machinery that we can make predictions about spin behaviors that we need in order to do physics. Thus we have an unfortunate case where the only way to answer the question "What is spin?" is to simply point at the math of Dirac and shrug.

Learn more by listening to the episode "How are we to understand quantum spin?" on the Ask A Spaceman podcast, available on iTunes and on the Web at http://www.askaspaceman.com. Thanks to Dean B., Pete E., @nirbnz, Kari Kale, and @sowjuinil for the questions that led to this piece! Ask your own question on Twitter using #AskASpaceman or by following Paul @PaulMattSutter and facebook.com/PaulMattSutter. Follow us @Spacedotcom, Facebook and Google+. Original article on Space.com.