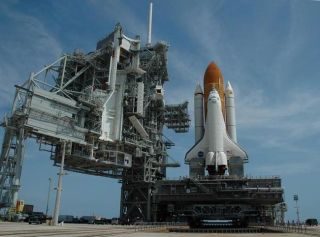 ?After manymonths of hard work, Atlantis is nearly ready to fly,? said NASA test directorSteve Payne Thursday in a mission briefing here at the Kennedy Space Center(KSC) spaceport. ?We are currently tracking no significant issues on thevehicle.?

Dark, heavyclouds poured rain and spouted lightning around KSC Wednesday evening, but theshuttle launch facility was spared the brunt of the storm?s fury.

Instead,most of the rain and even three-quarters inch hail fell some 50 miles (80kilometers) south of KSC.

?We didhave some significant weather in the area last night, but luckily, most of it cametogether in Melbourne, as opposed to up here over the launch pad,? said NASAshuttle weather officer Kathy Winters.

Forecasterspredict favorable weather conditions for Friday evening, when Atlantis isslated to loft into space at 7:38 pm EDT (2338 GMT) with the seven STS-117astronauts. Atlantis' astronaut crew, commanded by veteranspaceflyer Rick Sturckow, is tasked with delivering and installing two newtruss segments and a pair of starboardsolar arrays at the International Space Station (ISS).

The currentforecast gives an 80 percent chance that Atlantis will launch on time?up from70 percent yesterday. Favorable weather is also predicted for NASA?scontingency landing sites in the U.S. and Europe, Winters said.

In case ofa delay, the weather forecast for Saturday and Sunday drop to 70 and 60percent chance ?Go,? respectively.

?Overall,the first day is the best day for the overseas site and the U.S. site and alsoKennedy Space Center,? Winters said.

Atlantishas an open launch window from June 8 to 12, after which it will have to standdown for four days to make room for a planned rocket launch on June 14. Thewindow reopens on June 17 and runs through mid-July.

The shuttlewas originally slated to fly on March 15, but was delayed when a freakthunderstorm peppered the Atlantis' foam-covered external tank with hail, leavingthousands of defects that had to be repaired.

?We havecomplete confidence in our repair technique, and we expect it to perform, asdid STS-96? when Atlantis had to be similarly repaired, said Rob Worthy, NASAvehicle manager for Atlantis' fuel tank and solid rocket boosters. ?We feelthat we are safe and ready to fly.?

Today, theSTS-117 astronauts are scheduled to accompany their friends and family onspecial guest tours of KSC, as well as sit on a series of briefings related tolaunch and practice shuttle landing in a modified Shuttle Training Aircraft(STA).

The firstof four scheduled holds in the launch countdown will commence at 1:00 p.m. EDT (1700GMT) today, and will last for four hours. The rotating service structure thatprotects the shuttle is expected to be retracted later tonight, and fueling forlaunch is scheduled for tomorrow morning.