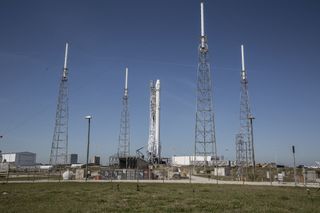 A SpaceX Falcon 9 rocket and Dragon cargo ship stand atop Space Launch Complex 40 at the Cape Canaveral Air Force Station, Florida in this file photo. SpaceX has delayed its next Falcon 9 launch from SLC-40 to no earlier than Dec. 13, 2017.
(Image: © SpaceX)

SpaceX has delayed the launch of its next cargo delivery mission for NASA by 24 hours to allow time for additional system checks, the company announced late Monday (Dec. 11).

A SpaceX Falcon 9 rocket will now launch a Dragon cargo ship to the International Space Station for NASA no earlier than Wednesday (Dec. 13) from Space Launch Complex 40 at the Cape Canaveral Air Force Station in Florida.

"Now targeting Dec. 13 for launch of CRS-13 from SLC-40 to allow for additional time for pre-launch ground systems checks," SpaceX representatives wrote in a Twitter update.

It is the second delay for the SpaceX mission, which was originally scheduled to launch Dec. 8. The mission, called CRS-13, is SpaceX's 13th commercial resupply services mission for NASA. The Dragon cargo ship filled with 4,800 lbs. (2,177 kilograms) of supplies and research gear for the space station's crew.

The CRS-13 mission will be SpaceX's first launch from the SLC-40 since an explosion on the pad in September 2016. It will also be the company's first mission to use a previously flown Falcon 9 booster together with a used Dragon space capsule. SpaceX has landed first-stage boosters of its Falcon 9 rockets 19 times on orbital flights. The company has also successfully flown a Dragon cargo ship twice for NASA. But this mission will mark the first to use two reused components. SpaceX has been developing reusable rocket technology to lower the cost of spaceflight.

"This is the beginning of rapid and reliable reusability," SpaceX Dragon mission manager Jessica Jensen said in a prelaunch press conference Monday (Dec. 11).