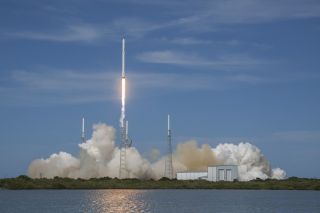 A SpaceX Falcon 9 rocket launches the company's Dragon capsule on an uncrewed cargo run to the International Space Station on April 14, 2015. The same Dragon is scheduled to launch toward the orbiting lab again on Dec. 12, 2017.
(Image: © SpaceX)

SpaceX's next robotic resupply mission to the International Space Station has been pushed from Friday (Dec. 8) to next Tuesday (Dec. 12) at the earliest.

During the mission, SpaceX's two-stage Falcon 9 rocket will lift off from Cape Canaveral Air Force Station in Florida, sending the uncrewed Dragon capsule on its way to the orbiting lab. Dragon will deliver about 4,800 lbs. (2,180 kilograms) of scientific hardware — including a space-junk tracker and a machine built by California company Made In Space that will manufacture optical fiber on orbit — and other supplies to crewmembers aboard the station.

The launch will initiate SpaceX's 13th contracted cargo run to the International Space Station for NASA. It will be the first one ever to launch with both a pre-flown Dragon and a pre-flown Falcon 9 first stage. (One previous SpaceX cargo mission featured a used Dragon.)

SpaceX aims to develop fully reusable spacecraft and rockets — technology that company founder and CEO Elon Musk has said will slash the cost of spaceflight.

The Falcon 9 first stage will attempt to pull off its second-ever touchdown shortly after liftoff Tuesday, coming back to Earth at Landing Zone-1, a SpaceX facility at Cape Canaveral.