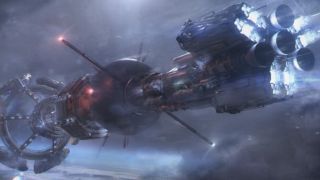 The ship for Syfy's new series "Nightflyers," which will have a 10-episode first season. It may premiere as early as July 2018.
(Image: © Syfy)

Science fiction meets horror in "Nightflyers," a new series on Syfy channel inspired by a story by author George R.R. Martin. Martin, whose "A Song of Ice and Fire" was adapted into the ultrapopular series "Game of Thrones" on HBO, shared more information about the upcoming series in a blog post.

"Nightflyers" is based on a 23,000-word novella (which was later expanded into 30,000 words) that Martin first wrote in 1980, according to an article on Syfy Wire. It was adapted into movie form in 1987, and will return again with a 10-episode first season, Martin revealed. The series' premiere date has not yet been announced, but Martin said if all went according to schedule, it would debut in late July.

"The inspiration for ['Nightflyers' and a previous novelette 'Sandkings'] was a statement I read somewhere by a critic, to the effect that SF and horror was opposites, and fundamentally incompatible," Martin wrote in a LiveJournal entry. "As a lifelong fan of both, that assertion struck me as nonsense, so I set out to prove it wrong by blending the two genres together." [The Best Scary Movies That Take Place in Space]

"Nightflyers" follows a ship's crew journeying to meet the alien Volcryn, according to Syfy Wire, but things quickly go off the rails.

Note that Martin offers spoilers for the end of the "Nightflyers" novella and movie in the paragraph below.

"At first I was baffled as to how they hoped to get a series out of my story, since at the end of the novella (and the film) pretty much everyone is dead (it was a horror story, after all)," Martin said. "But in May, [the production company] UCP got me a copy of [show creator] Jeff Buhler's script, and I saw how he'd dealt with that. It was a good read, and yes, I came away with a better idea of where they'd find a few seasons."

Buhler and showrunner Daniel Cerone met with Martin the week before Thanksgiving in Los Angeles to discuss the show and show off their set design — including the Nightflyer ship's design itself. Martin said that the show has a high enough budget for its look to appeal to modern audiences.

Martin added one particular tidbit that might intrigue "Game of Thrones" fans as well: "Nightflyers" will be shot on soundstages in Limerick, Ireland, which will give them access to some of the Irish and British actors who have been the mainstays of the HBO show.

"Considering how many characters we've killed, a lot of them should be available," Martin said.

The new series would debut on Syfy channel in the U.S. and via Netflix worldwide.