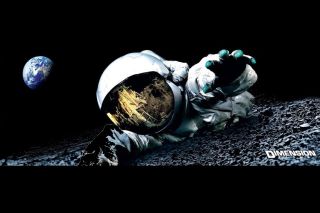 A promotional photo for the movie "Apollo 18," a found-footage horror movie about a secret mission to the moon. It's on our list of scariest space-based movies.
(Image: © Dimension Films)

No Halloween season is complete without a few scary movies, so here are Space.com's recommendations for the most frightening flicks with a cosmic twist.

In film, science fiction and horror have gone hand in hand since either genre was born. Among the space-exploration flicks of the 1950s, many feature space monsters and unfriendly aliens, and this simple premise has been revisited again and again over the last 60 years. Each time, filmmakers update their depictions of spaceships, cosmic destinations and the physical characteristics of alien beings, but the fundamental premise remains the same: What lies in wait in the darkness of space?

[Please note that these movies are not suitable for all viewers, and many of them contain disturbing images. We trust you'll use your own best judgement when deciding whether or not to see them.]

Most film buffs agree that "Alien" is one of the most terrifying movies ever made. Taking the idea of a haunted house to a whole new level, the movie focuses on a crew of astronauts trying to survive when a parasitic alien species gets aboard their isolated ship. The now-famous insectlike creatures, designed by H.R. Giger, stay hidden throughout most of the first film, moving in darkness and terrorizing the crew. And, of course, there's that scene in the mess hall. "Aliens" carries the torch extremely well, offering plenty of scares, but overall, it's more of an action movie than a horror flick. Either one would be a great addition to a Halloween movie session, but honestly, it's never a bad time to re-watch these science fiction classics.

Four movies constitute a trend: Filmmakers love to explore the possibility of finding life on a planet or moon close to Earth. Unfortunately, in these filmmakers' vision, the life-forms seem to always take an offensive position when they encounter humans. "Apollo 18" is a fun, found-footage-style horror movie about a fictional mission to the moon, which ends badly. The company that produced the movie actually tried to stir up rumors that the film was real, calling it a "documentary." They cooked up a story about how an entire moon mission could have been hidden from public knowledge. That campaign didn't really catch on, but it's still a fun flick. "Ghosts of Mars" is a hybrid of space-horror movie and supercool action movie (complete with lots of guns and cheesy one-liners). "Europa Report" and "Last Days on Mars" both have a more serious style, and each tries to create a fairly realistic depiction of what human missions to Mars or Jupiter's moon Europa might look like. But, as you might have guessed, neither of these stories ends well for the poor astronauts. These movies are all the more creepy considering that scientists are open to the idea that microbial life may exist on Mars, and perhaps more likely, under the icy surface of Jupiter's moon Europa.

Both of these movies feature images that, once seen, cannot be unseen. Get ready for visuals that will be burned into your brain for days or even years afterward. We're making an exception for "The Thing" (which involves an alien but does not take place in space), because it's just too good an entry not to include. The movie is one of the best works by legendary horror director John Carpenter, and features some truly bizarre and disturbing manipulations of people's bodies using makeup, prosthetics and puppetry. "Event Horizon," meanwhile, follows the crew of a spaceship venturing dangerously close to an artificial black hole, which takes them into the dark recesses of their own minds — a truly disturbing visual journey for fans of gore.

"Lifeforce" might be one of the strangest space movies ever made, and that's saying something. A trio of alien vampires is discovered on a spaceship near Halley's Comet, and is brought back to Earth where the creatures proceed to suck the "lifeforce" from human victims. The decrepit corpses of the victims then get up and start hunting for prey of their own. The movie was directed by Tobe Hooper (who also directed "Poltergeist" and "The Texas Chainsaw Massacre") and written by Dan O'Bannon (writer of "Alien" and co-writer of "Total Recall," who also did computer special effects for "Star Wars: A New Hope") Don Jakoby. Patrick Stewart (Captain Picard from the TV show "Star Trek: The Next Generation") has a supporting role.

Another great addition to the canon of 1980s space horror movies is "Creature," also released under the title "Titan Find," in which a group of space explorers stumbles upon "someone's collection of life from all over the galaxy, like a child's butterfly collection," as one character describes it. Unfortunately, not all the little pets are friendly, and the crewmembers find themselves struggling to get away. The trailer features the hilarious tagline, "In space, man is just another butterfly."

More vampires from space! "Planet of the Vampires" is a science fiction classic done in the hokey-but-beautiful style of the 1960s (the black-leather spacesuits inexplicably have collars that reach up past the astronauts' ears, and the women all have time to do their hair in beehives), but with a truly dark horror-movie twist (there is a lot of death in this film). The story follows a crew of astronauts that goes on a rescue mission to a desolate planet. There, the spacefarers find that their companions are dead, but the deceased's bodies have been re-animated by alien beings. In "It! The Terror from Beyond Space" (wherever "beyond space" is), "puny man matches his cunning against the monster from Mars running rampant!" That's according to the voice-over in the movie's trailer. This is a 1950s space-horror movie that offers all the great drama and style of genre films from this era.

We've noticed a trend in scary movie franchises: The fourth installment has a high chance of taking place in space (or, in the case of the "Friday the 13th"/"Jason" movies, the 10th installment). What is it about this milestone that inspires filmmakers to go to space? We're not sure. And let us be perfectly clear: We are not suggesting that these movies are good. In fact, some of them seem almost deliberately bad. But they offer a taste of the "classic" American horror genre (with a spacey spin), which is exactly what some viewers want come Halloween night. While these movies are not for the faint of heart, they usually offer more laughs than scares. Watch them and enjoy the bad acting, the limited special effects and the ridiculous deaths of all the side characters.